“It was market day in Bol and I was with two other girls who like me carried explosives,” the young woman told UN News. “I was just 15 years old. I was given drugs and had been trained by the extremist Boko Haram terrorist group to be a suicide bomber.”

The local authorities detected the three teenage girls and tried to arrest them, but the two other girls detonated their explosive vests, killing themselves and seriously wounding Halima Yakoy Adam. She survived but had both legs amputated below her knees.

Halima is one of the extraordinary young women, introduced to the United Nations Deputy Secretary-General in Chad on Thursday. UN News is accompanying her and other senior women from the world body, and the African Union, on a high-level visit that will include neighbouring Niger this weekend.

Boko Haram has been active in north-east Nigeria and the neighbouring countries of Cameroon, Chad and Niger for several years. Its chief aim is to create an Islamist state in the north of Nigeria. Its campaign of terror has caused the displacement of some 10 million people as of 2017, and led to the widespread destruction of basic infrastructure, such as health and educational facilities, as well as agricultural land and machinery.

These groups manipulate and exploit inequality. It is for this reason that our efforts to prevent violent extremism need to prioritize gender equality. - Phumzile Mlambo-Ngcuka (UN Women)

Coordination among the affected countries including through the Multinational Joint Task Force (MNJTF) has led to what the UN described last year as “encouraging progress in the fight against Boko Haram.”  But to compensate for that success, the group has changed its tactics, increasing the use of suicide attacks. In June and July 2017, the United Nations recorded some 130 attacks attributed to Boko Haram, leading to the deaths of 284 civilians in the four affected countries.

Speaking in Bol after talking to Halima, Deputy Secretary-General Amina Mohammed told UN News: “This is one of many stories I have heard, as this is where I come from. I come from Nigeria. This is sadly the story of many girls; but unlike Halima many did not survive.”

Ms Mohammed praised the young woman’s resilience, adding: “I think there is more awareness of suicide bombing today than there was before. There is nothing more powerful than a victim who tells her story. Halima has moved from victim to survivor because she is using that experience to educate other girls.”

Although the incidence of suicide bombing appears to be increasing in Chad, it is a relatively new development for women to be involved, according to Clarisse Mehoudamadji Nailar from CELIAF, a Chadian association of women leaders.

“Extremism amongst women didn’t exist in the past in Chad. This seems to be a new phenomenon,” she said. “The Government is making a big effort to fight the extremists and meanwhile non-governmental organizations in Chad are trying to educate and sensitize women about the dangers of extremism.”

A joint United Nations-African Union mission has been in Chad for two days. The visit which also included the Foreign Minister of Sweden, Margot Wallström, has focused on the importance of women’s meaningful participation in promoting peace, security and development.

The Executive Director of the UN’s gender agency, UN Women, Phumzile Mlambo-Ngcuka- also part of the mission - said that groups like Boko Haram aim to manipulate young girls to carry out terrorist acts. “What is common to these terrorist groups is the subjugation of women and girls and a denial of their rights”, she told UN News.

“These groups manipulate and exploit inequality. It is for this reason that our efforts to prevent violent extremism need to prioritize gender equality.” She added that “Halima’s story epitomizes the relationship between the lack of power of women and terrorism – a young woman who had no choices over decisions relating to her own life.”

Back in Bol in Chad’s Lac Region, Halima has finished her training as a paralegal. Today she considers herself an agent change of who sensitizes “my sisters against radicalism and extreme violence,” she said adding: “I am happy to have a second chance in life and now I want to give back to my community.”

Terrorism survivors: Forced to farm, fish, fight, ‘they slaughtered three of my friends’ 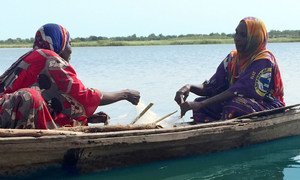 It’s eight o’clock in the morning and fifty-year-old Falmata Mboh Ali paddles her small dugout canoe to the shores of a tributary of Lake Chad in Bol, a small town 100 miles north of the capital of Chad, N’Djamena.