UNICEF/Alaa Al-Faqir
Families displaced from Rural Quneitra, southwest Syria, to areas near the Golan. Families are seeking shelter in open areas and camps and are reported to have significant shelter needs.
5 July 2018
Humanitarian Aid

“More than 320,000 people are now displaced and most are living in dire and insecure conditions, including some 60,000 people camped at the Nasib/Jaber border crossing with Jordan,” UN High Commissioner for Refugees, Filippo Grandi said, in a statement.

Although local communities in Syria have opened their doors to take in many of the displaced, most are forced to live in open spaces or in makeshift shelters that offer little safety and protection from the elements, he added.

“There are large numbers of women and children among the displaced, as well as elderly, injured and sick people and I am especially concerned about them,” he continued, adding that among the displaced are local humanitarian workers who have “selflessly served the civilian population throughout the duration of the conflict.”

Mr. Grandi underscored the immediate priority of finding a political solution to the conflict to spare civilians further suffering. Fighting between pro-Syrian government forces and opposition militia, has been intensifying for weeks across Dara’a Governorate, close to the Jordanian border, as well as the Golan Heights border area with Israel.

He said that while the UN and partners are doing what they can to deliver life-saving aid to the people of south-west Syria – both from within the country and across the Jordanian border – the security situation is hindering efforts to reach many people in dire need.

“I call on all parties to redouble efforts to cease hostilities, to allow humanitarian actors to deliver life-saving assistance, shelter and evacuate the wounded,” Mr. Grandi said, spelling out that civilian protection, safety and security along with that of humanitarian workers is of “utmost importance.”

It is “a core principle of international humanitarian law that needs to be guaranteed by all parties to the conflict and the international community at large,” he stressed.

“I commend Jordan for generously providing protection to hundreds of thousands of Syrian refugees since the beginning of the crisis and for providing and facilitating assistance to those in need inside Syria,” he said.

But, “given the immediate dangers,” added Mr. Grandi, “I am advocating for granting temporary refuge in Jordan to those in need of safety and for the international community to provide immediate and substantive support to Jordan, in a spirit of solidarity and responsibility sharing.”

Underscoring that UNHCR is prepared to immediately scale up its assistance inside Syria and to Jordan, the High Commissioner concluded: “Thousands of innocent lives are going to be lost, once again, if urgent action is not taken.”

In a statement issued by his spokesperson later on Thursday, Secretary-General António Guterres said that he was “gravely concerned by the resumption of the military offensive in southwest Syria and its continued devastating impact on civilians.”

“The Secretary-General fully supports today’s statement by the United Nations High Commissioner for Refugees, Filippo Grandi,” said Stéphane Dujarric, adding that there needed to be an “immediate suspension” of hostilities and the resumption of negotiations.

“He calls on all parties to take all necessary measures to safeguard civilian lives, allow freedom of movement, and protect civilian infrastructure, including medical and educational facilities, at all times, in accordance with international humanitarian law and international human rights law,” the statement continued.

“The Secretary-General further reiterates his call for the United Nations to be allowed to conduct cross-border and cross line humanitarian deliveries to resume without further delay for the benefit of people in need within Syria,” it concluded.

♦ Receive daily updates directly in your inbox - Subscribe here to a topic.
♦ Download the UN News app for your iOS or Android devices.
syria|jordan|refugees 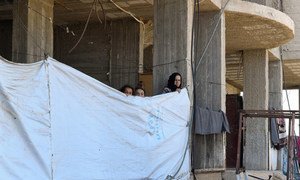 Intense air and ground-based strikes at multiple locations in Syria’s south-western Dara’a governorate has resulted in the “largest displacement” in the area since the conflict began more than seven years ago, the United Nations refugee agency has reported.