Eighty five per cent of Syrian refugee children in Jordan are living below the poverty line and a staggering 94 per cent of those under five in “multidimensional” poverty,  meaning that they are deprived of some of the most basic needs such as education, health or protection, an assessment by the United Nations Children’s Fund (UNICEF) has revealed.

“Seven years into [the Syria] crisis, we need to collectively continue to do all that we can to support vulnerable refugee children and their families that are struggling to meet their basic needs,” Robert Jenkins, the head of UNICEF programmes in Jordan, said in a news release Sunday.

Based on responses from the refugees, the assessment also showed that close to 65 per cent of Syrian refugee families are either food insecure or on the verge of becoming food insecure – meaning they do not have enough for an adequate diet.

UNICEF teams also reported parents stating that that they skip meals to allow their children to sufficiently eat.

Furthermore, nearly half the children in the 0-5 age group do not have access to proper health services including vaccinations and disability services, and 16 per cent do not have a birth certificate, exposing them to additional risks as they grow up.

In all 38 per cent of Syrian children are not in school; while for children aged 6-17 years, child labour and violence continue to be key challenges.

Responding to the crisis, UNICEF is working with the Government of Jordan as well as donors and partner organizations to provide targeted support and youth to positively engage in their communities and transition to meaningful employment, continuing education and training opportunities.

However, its efforts have been severely affected by a funding crunch. The UN agency currently faces a funding shortfall of $145.7 million to meet the needs of all vulnerable children in Jordan this year.

“With the unparalleled massive scale of Syria crisis and its prolonged nature, Jordan needs continued support in order to manage the impact of this crisis and meet the needs of vulnerable children,” added Mr. Jenkins.

According to estimates, there are about  660,000 Syrian refugees in the country. Slightly over half that number are children aged 17 or below.

♦ Receive daily updates directly in your inbox - Subscribe here to a topic.
♦ Download the UN News app for your iOS or Android devices.
jordan|syria 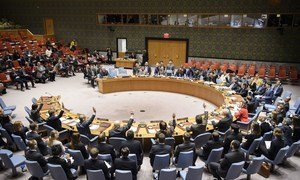