United Nations Secretary-General António Guterres has applauded Bangladesh for giving a safe haven to hundreds of thousands of Rohingya refugees driven from their homes in Myanmar by systematic and widespread violence.

On mission in Bangladesh, the Secretary-General praised the country for keeping its borders open and receiving those in need of international protection.

“In a world where so many borders are closed, [the people and Government of Bangladesh] have opened their borders and received their brothers and sisters coming from Myanmar and from the terrible events there,” said Mr. Guterres in the capital Dhaka on Sunday.

The UN chief also praised the World Bank for its recently announced multi-million-dollar grant for Bangladesh to support both refugees and  the communities hosting them.

If one looks at the low areas, close to the sea, we understand how vulnerable Bangladesh is to the impact of climate change – Secretary-General Guterres

Mr. Guterres also warned of the impact of climate change, particularly for countries such as Bangladesh, where much of the land lies close to sea-level.

He called for greater political will to realize the commitments made  through the 2015 Paris climate change agreement and urged countries to raise their ambition to limit temperature rises.

The UN chief also underscored the importance of empowering women and youth, calling for young people to be given  more opportunities and great access to education.

The Secretary-General arrived in Bangladesh early on Sunday as part of a joint trip with the President of the World Bank Group, Jim Yong Kim.

On Sunday, Mr. Guterres and Mr. Kim also met with Sheikh Hasina, the Prime Minister of Bangladesh, where they discussed collaboration with her government to address the complex Rohingya crisis. They spoke about how they could work together to create conditions conducive for the return of Rohingya refugees to Myanmar, while at the same time, improving condtions for them in Bangladesh.

“By hosting the Rohingya, Bangladesh has done a great service for the world. We will support this effort any way we can,” said Mr. Kim in a tweet following the meeting.

.@antonioguterres and I commended Prime Minister Sheikh Hasina for the generosity Bangladesh has shown. By hosting the #Rohingya, Bangladesh has done a great service for the world. We will support this effort any way we can. pic.twitter.com/6lXQ62Wuui

The Secretary-General and the World Bank Group President also visited the Bangabandhu Memorial Museum which was the house of Bangabandhu Sheikh Mujibur Rahaman, the first President of Bangladesh and father of the current Prime Minister. He and other members of his family were assassinated there in August 1975 by a group of soldiers.

Later in the evening, the Secretary-General and his delegation were hosted for an official dinner by the Prime Minister of Bangladesh.

On his mission, Mr. Guterres is being accompanied by number of senior UN officials, including the High Commissioner for Refugees, Filippo Grandi, and the Executive Director of the UN Population Fund (UNFPA), Natalia Kanem.

On Monday, they are due to travel to Cox’s Bazar in southern Bangladesh to visit Rohingya refugee communities and humanitarian workers.

On Monday I’ll be with @JimYongKim in Cox’s Bazar, Bangladesh on a mission of solidarity with Rohingya refugees and the communities supporting them. The compassion & generosity of the Bangladeshi people shows the best of humanity and saved many thousands of lives. pic.twitter.com/FZJpQpLyJg

Since late August 2017, violence against Myanmar’s mainly-Muslim minority Rohingya, forced hundreds of thousands to flee their homes in Rakhine state and seek refuge across the border, in Bangladesh. Prior to that, well over 200,000 Rohingya refugees were already sheltering in Bangladesh as a result of earlier displacements.

Even though the number of new arrivals has tapered off, and an agreement has been reached between the UN on the ground and the government, over establishing conditions in Myanmar to allow refugees’ voluntary and safe return, UN agencies there have reported that such conditions have not yet materialized.

As of 24 May, there are an estimated 905,000 refugees in Cox’s Bazar. To address the ongoing and increasing needs, the UN launched a Joint Response Plan in March, urging $951 million to provide life-saving assistance the refugees and host communities. However, the appeal remains only 18 per cent funded. 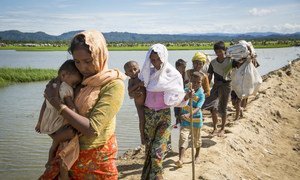 The continuing plight of nearly one million Rohingya refugees driven from their homes in Myanmar will be the focus of the United Nations Secretary-General António Guterres when he travels to Bangladesh this weekend – the country where they have found safe-haven.