Transfer of Rohingya refugees to Bay of Bengal island ‘must be voluntary’: UN refugee agency

The head of the UN refugee agency (UNHCR), has voiced concerns over the reported relocation of some Rohingya refugees by Bangladeshi authorities, to an island off the country’s coast, in the Bay of Bengal.

“Any transfer must follow a voluntary, informed decision”, Filippo Grandi, UN High Commissioner for Refugees, said on Twitter on Sunday.

I am concerned by reports of #Rohingya refugees in Bangladesh being moved to Bhasan Char.

UNHCR and UN partners seek access to them in order to hear their voices, understand their wishes and see conditions on the island.

According to media reports, about 1,600 Rohingya refugees have moved from camps in Cox’s Bazar to the Bhasan Char island in the Bay of Bengal, a low-lying island said to be vulnerable to cyclones and flooding.

“UNHCR and UN partners seek access to them in order to hear their voices, understand their wishes and see conditions on the island”, added Mr. Grandi.

Last week, the UN office in Bangladesh said that it has not been involved in preparations for the movement of refugees to Bhasan Char, or in selecting or deciding which families would be moving.

In a statement, the office stressed that “any relocations to Bhasan Char should be preceded by comprehensive technical protection assessments.”

The independent UN assessments would review the safety, feasibility and sustainability of Bhasan Char as a place for refugees to live, as well as the framework for protection and the assistance and services they would be able to access on the island.

“Since the Government announced the Bhasan Char project, the UN has offered to engage in constructive consultations aimed at better understanding the plan and considering with the Government the most critical policy, process and operational issues. [We] remain willing to continue this dialogue”, the statement added. 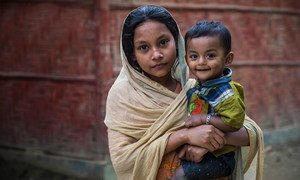 A joint UN-hosted donor conference to rally international support behind Myanmar’s displaced Rohingya minority, ended on Thursday with a promise to continue engaging with concerned countries towards finding a long-term solution to their plight.