UNHCR/Gordon Welters
In Germany, a UN resettlement programme gives families hope. Here, an immigration officer stamps the passports of a Syrian family that has just landed at Hanover airport on a charter flight from Egypt.
25 June 2018
Migrants and Refugees

Close to 1.4 million people will need resettlement in countries free from war and persecution in 2019, the UN refugee agency, said on Monday, citing growing forced displacement across the globe.

Resettlement – the transfer of refugees from the country where they have claimed asylum to a safe “third country” – is the responsibility of international agencies, including Office of the UN High Commissioner for Refugees (UNHCR).

Noting a 17 per cent projected overall increase in needs next year, the UN agency’s Projected Global Resettlement Needs 2019 report warns that access to this “key, durable solution” for those in need of international protection is extremely limited.

Refugees from 36 nationalities are in need of resettlement out of a total of 65 international operations, the UNHCR report states.

For the third year in a row, refugees from Syria are set to have the highest resettlement requirements, at more than 600,000 people.

This represents a 26 per cent increase on current needs.

Regionally, Africa is likely to remain the region with the highest projected resettlement needs next year, led by the Democratic Republic of the Congo (DRC).

In South Sudan, meanwhile, continued instability and violence are behind a 71 per cent increase in needs, with 158,000 individuals out of more than 2.4 million refugees expected to require shelter in a third country next year.

Elsewhere on the African continent, protracted instability will continue to affect “Congolese, Somalis, Sudanese and Eritreans”.

Over 95 per cent of this requirement is represented by Syrian refugees in Turkey.

In the Middle East and North Africa region, resettlement needs are projected at 271,297 people in 2019 - a slight decrease from this year.

Reflecting the inclusion of “high-risk protection cases” from El Salvador, Honduras and Guatemala, projected resettlement needs in the Americas region in 2019 are forecast to rise 123 per cent in 2019, to just over 4,000 people.

The need to expand resettlement was acknowledged by all UN Member States in the September 2016 New York Declaration for Refugees and Migrants.

Despite this, the UNHCR report notes recent “fluctuations” in State resettlement quotas which have seen quotas grow from 2012 to 2016, only to see a “steep reversal” in 2017, when only 75,200 refugees were offered resettlement globally.

Because of this development, the UN refugee agency is preparing to focus on three major crises in 2019: countries hosting large numbers of refugees; central Mediterranean migration: and resettlement out of Turkey, Lebanon, Jordan, Iraq and Egypt linked to the Syria conflict. 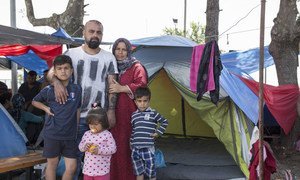