UNHCR/Socrates Baltagiannis
Youssef, a Kurdish-Iraqi from the city of Zakho, stands with his wife and kids outside their small tent in the Diavata reception site near Thessaloniki in northern Greece.
20 June 2018
Migrants and Refugees

The statement by Filippo Grandi, UN High Commissioner for Refugees, and Henrietta Fore, Executive Director of the UN Children’s Fund (UNICEF) came in an editorial published on the website for CNN, the US-based cable and online news network.

Wednesday is World Refugee Day, which is marked annually, each 20 June, when the UN system highlights the strength, courage and perseverance of refugees across the world, and calls on the public to show support for families forced to flee.

“Here is our call to action: refugee children, whether on our doorsteps, or in remote borderlands, must be protected, sheltered and equipped for their futures,” wrote the agency chiefs.

“Our ability to make a difference in their lives - between despair and hope, and being left behind and building a future - is a test of our shared humanity.”

Globally, more than 68 million people have been forcibly displaced from their homes, with children making up more than half the world’s refugee population.

Our ability to make a difference in their lives - between despair and hope, and being left behind and building a future - is a test of our shared humanity - Filippo Grandi, UNHCR and Henrietta Fore, UNICEF

Furthermore, nearly 174,000 refugee and asylum-seeking children have been separated from their families or forced to flee on their own.

With conflicts multiplying and intensifying in recent years, thus creating millions more refugees and displaced people, “governments seem to have overlooked their duty of care to children,” the UN agency chiefs stated, adding “perhaps it is because the statistics can be so staggering that they harden us to the human suffering that underpins them.”

They stressed that all “children on the move” should receive the same care and compassion as any other child.

“Children are first and foremost children - and regardless of their nationality, their legal status, or that of their parents, their welfare and rights must be at the center of our actions,” they said.

The UN officials recalled the “unthinkable suffering” refugee children endure in their quest for safety, only to face hostility and rejection when they arrive.

“Turned away by border guards and impenetrable barbed wire fences, kept in detention centers, or separated from their parents - the violence that propelled them from their countries is perpetuated by the hostile reception they receive,” they said.

However, if young refugees are provided with a safe environment, an education and opportunities, they will flourish and contribute to their host countries and help rebuild their homelands when conditions allow, the UN officials added.

They looked to the implementation of the Global Compact on Refugees, which will be presented to world leaders meeting at the UN later this year.

It calls for investments in communities hosting refugees, fair and humane asylum policies, and more opportunities for resettlement and family reunification, among other proposals. 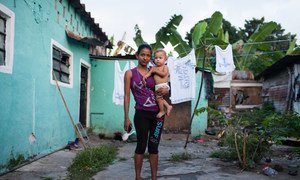 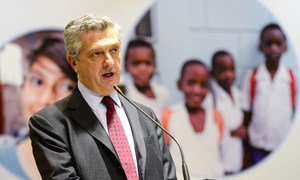 The number of people forced to flee their homes last year rose by nearly three million to 68.5 million, the head of the UN refugee agency, UNHCR, said on Tuesday, warning that the world’s displacement hotspots “are becoming hotter”.