The health and wellbeing of women and children in North Korea has improved slightly in recent years but “urgent” challenges remain in rural areas, the UN Children’s Fund, UNICEF, said on Wednesday.

Analysing information gathered from more than 8,500 households across the country, known officially as the Democratic People’s Republic of Korea, on everything from child labour, to the kind of fuel that families use to stay warm, the agency says that it has built up a “snapshot” of the lives of ordinary citizens in DPRK.

According to the DPRK survey, nearly 40,000 severely malnourished children received treatment in 2017 and more than 700,000 youngsters and mothers took nutritional supplements last year.

The survey, which was carried out with UNICEF’s support on the ground, also shows that one in five children was stunted in 2017, compared with more than one in four in 2012.

The growth indicator – which is used to highlight chronic or recurrent malnutrition – highlights significant differences between urban and rural areas.

In the capital Pyongyang, 10 per cent of children are affected by stunting, while in Ryanggang Province more than three times that percentage suffer, UNICEF Regional Director for East Asia and the Pacific, Karin Hulshof, told journalists in Geneva.

Youngsters in certain rural areas “urgently require much more support”, she cautioned, adding that there is “a big difference between the capital city and the countryside: an urban-rural divide”.

Among the other findings of the 2017 DPR Korea MICS Survey Findings Report are indicators showing that one in 10 children suffers from diarrhoea - a leading contributor to malnutrition and death.

In 2009, 67 per cent of children were treated with oral rehydration salts, increasing to 74 per cent last year.

The latest survey also reveals that more than one third of household drinking water is contaminated, making access to safe water and sanitation “a priority” for UNICEF in DPRK, Ms Hulshof said.

Once again, the situation is worst in rural areas, where nearly half of children are “still exposed to significant risks of illness and malnourishment”.

UNICEF and its partners are helping by installing gravity-supplied water systems to remote communities and “more houses now have access to clean water, which is good news,” Ms Hulshof said.

Other findings indicate that seven per cent of five to 11-year-olds are involved in child labour and that most households use coal or wood rather than cleaner fuel sources to heat their homes.

Defending the value of the survey and welcoming the “improved seriousness and openness” of the DPRK, the UNICEF official said that this new approach “could transform the lives” of tens of thousands of children – although much more needed to be done.

♦ Receive daily updates directly in your inbox - Subscribe here to a topic.
♦ Download the UN News app for your iOS or Android devices.
Democratic People's Republic of Korea|DPRK|survey|Report 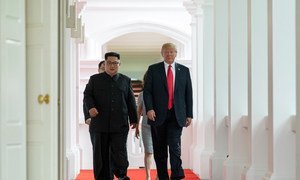 Tuesday’s historic summit between the leaders of the United States and the Democratic People’s Republic of Korea (DPRK) has been hailed as “an important milestone” by the UN Secretary-General. 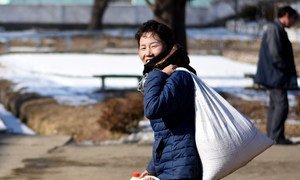 The head of the United Nations food relief agency said on Friday that many mothers and young children in North Korea are still relying on humanitarian assistance to meet their nutritional needs.