WFP/Colin Kampschoer
In the Democratic People’s Republic of Korea, WFP implements food-for-work activities, providing food as payment for the building or repair of community infrastructure and assets (file)
11 May 2018
Humanitarian Aid

The head of the United Nations food relief agency said on Friday that many mothers and young children in North Korea are still relying on humanitarian assistance to meet their nutritional needs.

“I see a country that is working hard to achieve food security and good nutrition,” said the Executive Director of the World Food Programme (WFP), David Beasley, at the end of his four-day visit to the Democratic People’s Republic of Korea (DPRK).

WFP aims to assist 650,000 women and children in DPRK every month, providing highly nutritious, fortified cereals and biscuits that can address crucial gaps in their diets.

Funding shortfalls, however, have meant that rations have had to be reduced and even suspended in some cases.

“I came to DPRK to listen, look and learn with an open mind. This visit has given me a first-hand opportunity to assess the needs and evaluate WFP’s operations on the ground,” he said.

“There is a real need for continued humanitarian assistance, especially when it comes to meeting the nutritional needs of mothers and young children,” he added.

Last month, UN Resident Coordinator in the north Asian country, Tapan Mishra, said that the UN and its partners are urgently requesting $111 million in humanitarian funding to assist millions of people in DPRK, including children whose growth has been stunted because they are not getting enough nutritious food to eat.

The appeal was based on the Needs and Priorities Plan 2018, which said that amidst political tensions, an estimated 10.3 million people across DPRK continue to suffer from food insecurity and poor nutrition, as well as a lack of access to basic services.

During his visit, Mr. Beasley spent two days in the capital, Pyongyang, meeting with senior government officials, and two days visiting WFP projects in different parts of the country.

He travelled to Sinwon County in South Hwanghae Province where he visited a “food-for-assets” project in Komchon Ri village as well as a WFP-supported children’s nursery.

He also travelled from Pyongyang to Sinuiju City in North Pyongan province, visiting a local factory where WFP produces fortified biscuits for its projects.

WFP has had a long relationship with the country, stretching back 23 years.

“Much progress has been made, but much work lies ahead,” the WFP chief said.

♦ Receive daily updates directly in your inbox - Subscribe here to a topic.
♦ Download the UN News app for your iOS or Android devices.
DPR Korea|DPRK 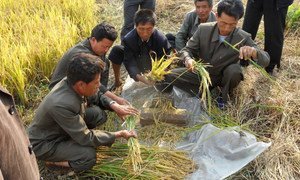 The United Nations and its partners are urgently requesting $111 million in humanitarian funding to assist millions of people in the Democratic People’s Republic of Korea (DPRK), including children whose growth has been stunted because they are not getting enough to eat.