UN Photo/Evan Schneider
The UN General Assembly votes on and adopts resolution on the Protection of the Palestinian civilian population.
13 June 2018
Peace and Security

In an emergency meeting on Wednesday, the United Nations General Assembly adopted an Arab-sponsored resolution calling for greater protection for Palestinians, and deploring any use of “excessive, disproportionate and indiscriminate” force by the Israeli military against Palestinian civilians, particularly in Gaza.

The emergency session of the 193-member Assembly, came about following weeks of violence along the border of the Gaza Strip – the Palestinian enclave blockaded by Israel – where hundreds of thousands of Palestinians participated in “the Great March of Return” protests, beginning at the end of March.

More than 120 Palestinian civilians were reportedly killed by Israeli forces while participating in the protests against Israel’s years-long blockade.

The resolution was adopted by a vote of 120 in favour, 8 against, with 45 abstentions.

A US amendment which condemned the role played in Gaza by the Hamas extremist group, which controls the enclave, was voted on first.

After several rounds of procedural voting, and delays over tallying votes, the US text secured the support of 62 countries, with 58 against; coming up short of the two-thirds majority needed.

Assembly President Miroslav Lajčák convened the meeting, following a formal request from Algeria and Turkey, in their respective capacities as Chair of the Arab Group and Chair of the Summit of the Organization of Islamic Cooperation.

Unlike a resolution on Palestinian civilian protection that was vetoed by the US in the UN Security Council on 1 June, Wednesday’s identical resolution in the Assembly was not subject to the same rules as exist in the Council.

Introducing the amendment before voting, the US Ambassador to the UN, Nikki Haley, said that “the nature of this resolution clearly demonstrates that politics is driving the day.”

“It is totally one-sided. It makes not one mention of Hamas, who routinely initiates violence in Gaza. Such one-sided resolutions at the UN do nothing to advance peace between Israel and the Palestinians,” she said.

Also prior to voting, the Permanent Observer of the State of Palestine to the UN, Riyad Mansour, said that “our decision to approach to the Assembly was prompted by the Security Council’s failure to act due to the veto cast on 1 June by a permanent member.”

“We therefore firmly reject the bad-faith attempt to insert an amendment that would radically unbalance the text and shift the Assembly's focus away from the core objective of protecting civilians and upholding international law,” he said.

UN Photo/Evan Schneider
Riyad Mansour, Permanent Observer of the State of Palestine to the UN, addresses the resumed tenth emergency special session of the General Assembly.

The text adopted “deplores the use of any excessive, disproportionate and indiscriminate force by the Israeli forces against Palestinian civilians in the Occupied Palestinian Territory, including East Jerusalem, and particularly in the Gaza Strip, including the use of live ammunition against civilian protesters, including children, as well as medical personnel and journalists, and expresses its grave concern at the loss of innocent lives.”

It also “demands that Israel, the occupying Power, refrain from such actions and fully abide by its legal obligations and responsibilities” under the fourth Geneva Convention on protecting civilians in times of war.

It also requests that the Secretary-General, within 60 days, present his “proposals on ways and means for ensuring the safety, protection and well-being of the Palestinian civilian population under Israeli occupation, including “recommendations regarding an international protection mechanism.”

The text also “deplores the firing of rockets from the Gaza Strip against Israeli civilian areas,” but does not single out Hamas as being responsible for such launches.

The US amendment sought to add to the Arab-sponsored text, a paragraph, by which the Assembly would “condemn Hamas for repeatedly firing rockets into Israel and for inciting violence along the boundary fence, thereby putting civilians at risk.”

It would have also demanded that “Hamas cease all violent activity and provocative actions,” and condemned the use of resources in Gaza to construct military infrastructure, including tunnels to infiltrate Israel and equipment to launch rockets into civilian areas, saying that such funds should be used to address the critical needs of the civilian population.

Wednesday’s meeting – the tenth emergency special session – was held in accordance with the so-named ‘Uniting for peace’ procedure.

This procedure, under Assembly resolution 377 (1950), is a pathway around a Security Council veto. By it, the Assembly can call an emergency special session to consider a matter “with a view to making appropriate recommendations to members for collective measures,” if the Security Council fails to act or if there is lack of unanimity among the Council’s permanent members, China, France, Russia, United Kingdom, and the United States.

Resolutions in the Assembly are non-binding and do not carry the force of international law as do measures agreed in the Security Council.

Find out more about the Assembly’s emergency special sessions and resolution 377 (1950) here.

♦ Receive daily updates directly in your inbox - Subscribe here to a topic.
♦ Download the UN News app for your iOS or Android devices.
Gaza|Palestine 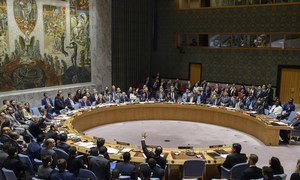 The United Nations Security Council on Friday failed to adopt two competing draft resolutions; one produced by Kuwait, in response to the killing of dozens of Palestinian protestors in Gaza, and the other tabled by the United States, which vetoed the initial resolution saying it was “grossly one-sided” against Israel.