UN Photo/Martine Perret
Plastic bottles and garbage waste from a village in Timor-Leste wash on the shores of a river and then spill into the sea.
8 June 2018
Climate Change

Marking the day on Friday, the UN chief reminded everyone of the major role the oceans have in everyday life, as the lungs of the planet, providing most of the oxygen that we breathe.

“The oceans make our blue planet unique in our solar system – and not just visually,” he said adding that they help regulate “the global climate and are the ultimate source of the water that sustains all life on Earth, from coral reefs to snow-covered mountains, from tropical rain forests to mighty rivers, and even deserts.”

“However,” he continued “the ability of the oceans to provide their essential services is being threatened by climate change, pollution and unsustainable use.”

Eighty per cent of all pollution in the sea comes from land, including some eight million tons of plastic waste each year, that have cost the lives of one million seabirds and 100,000 marine mammals. Moreover, it causes $8 billion in damage annually to marine ecosystems.

Pollution, said Mr. Guterres, “chokes waterways, harms communities that depend on fishing and tourism, kills turtles and birds, whales and dolphins, and finds its way to the most remote areas of the planet and throughout the food chain on which we ultimately rely.”

“Unless we change course, plastic waste could soon outweigh all the fish in the oceans,” Mr. Guterres added.

The UN chief urged everyone to work individually and collectively to “stop this preventable tragedy” and significantly reduce marine pollution of all kinds.

“Action starts at home, and speaks louder than words,” he said. “The United Nations aims to lead by example, and more than 30 of our agencies have now begun working to end the use of single-use plastic.”

But everyone needs to play a part by taking simple actions like carrying your own water bottle, coffee cup and shopping bags; recycling plastic, said Mr. Guterres; avoiding products that contain microplastics; and volunteering for a local clean-ups.

“If we all do a little, our combined actions can be massive,” he added.

“On this World Oceans Day, I urge governments, communities and individuals alike to celebrate our oceans by helping clear them of pollution and ensure they remain vibrant for generations to come,” concluded the Secretary-General.

♦ Receive daily updates directly in your inbox - Subscribe here to a topic.
♦ Download the UN News app for your iOS or Android devices.
environment|oceans|plastic 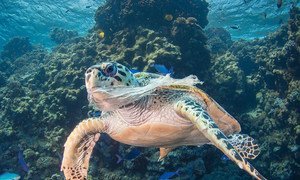 An underwater photographer’s chance encounter with a starving turtle led to a personal “awakening” about the dangers discarded plastic poses to sea life in the world’s oceans.