UNICEF/Vishwanathan
Girls run and play the sport of "kabbadi" at a Government-run middle school in rural India. According to the UN health agency, exercising and playing sports can help the human body fight off various diseases.
4 June 2018
Health

One-in-five adults and 80 per cent of adolescents worldwide are not getting enough exercise, according to the World Health Organization (WHO), which on Monday launched a new action plan to tackle the situation and promote good health.

"Being active is critical for health. But in our modern world, this is becoming more and more of a challenge, largely because our cities and communities aren’t designed in the right ways," said Tedros Adhanom Ghebreyesus, WHO Director-General on Monday, launching the WHO Global action plan on physical activity and health 2018-2030: More active people for a healthier world, alongside Portuguese Prime Minister, António Costa.

Girls, women, older adults, poorer people, people with disabilities, the chronically-ill, and indigenous people on the margins of society, have even fewer opportunities to be active.

"We need leaders at all levels to help people to take the healthier step. This works best at city level, where most responsibility lies for creating healthier spaces," he added.

According to WHO, regular physical activity is key to preventing and treating heart disease, stroke, diabetes and other noncommunicable diseases, which are responsible for 71 per cent of all deaths globally, including some 15 million annually, for those aged 30 to 70.

The action plan maps out how countries can reduce physical inactivity in adults and adolescents by 15 per cent up to 2030, and recommends a set of 20 policy areas, which combined would improve opportunities for people of all ages and abilities to do more walking, cycling, dancing, sport and active recreation.

It also supports more training for healthcare workers and other professionals, stronger data systems and better use of digital technologies.

"You don’t need to be a professional athlete to choose to be active. Taking the stairs instead of the elevator makes a difference. Or walking or using the bike instead of driving to your neighborhood bakery,” Mr. Tedros stressed.

The new drive, launched at the Portuguese Football Association’s iconic Cidade do Futebol, aims to encourage governments and city authorities to help people to be more physically active and healthier.

"The Portuguese Government is highly committed to implement a systemic approach to promote physical activity” said Mr. Costa, adding that he was honoured to host the launch of the Global Action Plan. 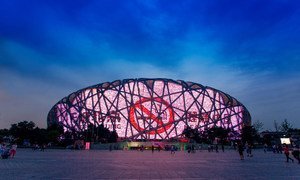