“Peace and sustainable development are two sides of the same coin – one cannot be achieved without the other,” said Mr. Guterres marking Africa Day.

“To promote peace, the UN will continue to support prevention,” he added.

Commemorated annually on 25 May, Africa Day marks the founding in 1963 of the Organization of African Unity, now known as the African Union (AU).

In his message, the UN chief applauded the continent’s leaders for reaching agreement on the African Continental Free Trade Area just a few months ago, thereby creating one of the world’s largest trading blocs, comprising more than 50 countries.

He also noted the trend towards general economic and social progress across the continent as well as the greater participation of women in national parliaments and decision-making.

On this Africa Day, I urge all nations to support a peaceful, prosperous Africa.  What is good for Africa is good for the world – Secretary-General António Guterres

The Secretary-General also called for strengthening capacity to address crises before they escalate as well as the ability to detect and defuse them.

“The UN will also work to support the African Union’s commitment to ‘Silence the Guns’ by 2020 and promote the indispensable role of women and youth in conflict prevention and peace building,” he added.

Mr. Guterres also highlighted growing links between the 2030 Agenda for Sustainable Development adopted by UN Member States almost three years ago, and the African Union Agenda 2063; and said that they can provide a foundation for resilience and social and economic progress for the entire continent.

The Secretary-General also recalled the framework signed between the UN and the AU on implementing Agenda 2063 and the 2030 Agenda more coherently, and a similar pledge to work together to improve peace and security.

That framework, signed in April 2017, strengthens partnership between the two organizations to meet the evolving challenges of peace operations. 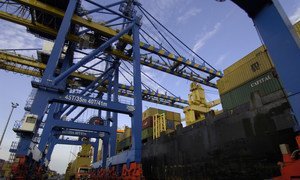