Jonathan Ernst/World Bank
A ship being uploaded at a port in Ghana.
22 March 2018
Economic Development

“I congratulate African leaders for taking the leap into history by signing the African Continental Free Trade Area,” said Mr. Guterres in a statement on Thursday.

“This is an important step towards achieving the Sustainable Development Goals (SDGs) and delivering on the African agenda of peace and prosperity.”

In the statement, Secretary-General Guterres also underscored that the entire UN system stands ready to support the continent as it moves towards the entry into force of the Free Trade Area in the coming months.

He also applauded the leadership of President Paul Kagame of Rwanda, President Mahamadou Issoufou of Niger and the Chairperson of the African Union Commission, Moussa Faki Mahamat, who led the process for the agreement.

According to the UN Economic Commission for Africa (ECA), the Organization’s development arm in the region, the agreement has the potential both to boost intra-African trade by 52.3 per cent by eliminating import duties, and to double this trade if non-tariff barriers are also reduced.

It is expected that the key beneficiaries from the Free Trade Area will be Africa’s small and medium sized enterprises, which account for 80 per cent of the region’s businesses; women, who represent 70 per cent of the informal cross-border traders; and the youth, who will be able to find new employment opportunities. 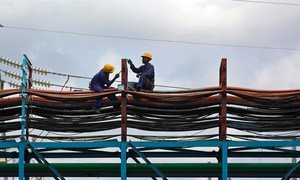