The world is sliding back on human rights and its principles are under attack in all corners of the globe, the top United Nations rights official warned on Tuesday, urging people everywhere to show “fierce and passionate commitment” in defending them.

In a hard-hitting speech marking the 25th anniversary of the World Conference on Human Rights that underscored the “universal, indivisible, interdependent and interrelated” nature of human rights, UN High Commissioner for Human Rights Zeid Ra’ad Al Hussein, said that a quarter century on, the world seemed instead to be “headed in another direction.”

At the 1993 Conference, 171 States adopted the Vienna Declaration and Programme of Action, to strengthen human rights around the world. It was widely viewed as the blueprint for rights in the post-Cold-War era.

The conference also set in motion the establishment of the UN human rights office, or OHCHR, which Mr. Zeid now heads.

Addressing the conference on Tuesday, he said there was a drift “backwards, to an era when racists and xenophobes deliberately enflamed hatred and discrimination among the public, while carefully cloaking themselves in the guise of democracy and the rule of law.”

He cautioned that particularly in Europe, ethno-populist parties are on the rise in many countries, fuelling hatred and division. Once in power, these parties were deliberately spreading “distorted and false views” of migrants and human rights activists.

“Almost everywhere, across Europe the hatred they direct at migrants has infiltrated the mainstream parties and skewed the political landscape towards greater violence and suffering,” said Mr. Zeid.

Today is not a time for ‘soporific complacency’

Noting the threats against human rights around the world, which were no longer treated as “a priority” but instead as “a pariah,” he called on everyone to stand up for what the Vienna Declaration really represents.

“We need to use this anniversary to begin to mobilize a much broader community to defend human rights with our fierce, and passionate commitment,” said Mr. Zeid stressing the need to make clear “the vital, life-saving importance of human rights for the daily lives and global future of our fellow human beings.”

“There is no time to lose. Let this be a turning point, so that the Vienna Declaration can stand proud – not as a decaying museum piece, but as the flag-bearer for a resurgent movement to build peace and progress,” he said. 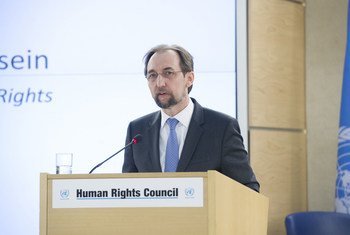 Stoking fear among followers is not clever politics but a recipe for self-destruction, warns UN rights chief

In a scathing address to the Human Rights Council, the top United Nations rights official on Wednesday warned political leaders who stoke fear and intolerance among their followers for the sake of their own ambitions are merely copying the behaviour of previous generations of once strong, but ultimately catastrophic, leaders and politicians.