The International Organization for Migration, or IOM, is overseeing the dredging of more than nine kilometres of abandoned canals, which will then be renovated, in the Cox’s Bazar area, which is home to around 700,000 mainly-Muslim Rohingya who have fled violence in northern Myanmar.

IOM said that the project in Ukhiya sub-district would prevent flooding and allow water runoff during the annual heavy rains that come with the arrival of monsoon season.

Moreover, the UN agency has employed 50 Bangladeshi labourers locally, to carry out the work, as part of a wider IOM-supported disaster-preparedness programme.

The project will not only help safeguard lives and livelihoods when the monsoon hits by reducing the risk of flooding, it will also provide much-needed irrigation channels during the dry season.

“There was no water flow in the canal, as it hadn’t been maintained for years”, said the agency’s Damon Elsworth. “This resulted in flooding in the surrounding communities during the monsoon as the rainwater coming down from the adjacent hills couldn’t flow through.”

Cox’s Bazar was already prone to landslides and flooding, even before hundreds of thousands of Rohingya refugees began arriving at the end of last August.

IOM, the World Food Programme (WFP) and the UN human rights office (OHCHR) are participating in the $20,000 canal clearing project.

Local residents working on the project said they were happy to be employed protecting community.

“It feels good that we were consulted at every step of this dredging work. It feels like it is our property that we’re working for,” said Syed Kashem, 65, a local community leader overseeing the dredging work.

Cox’s Bazar has already experienced the first rains of the season. IOM and other agencies are working to help local authorities respond to a wide range of potential emergency situations. Roads, pathways, bridges and drains have been built and land has been stabilized and levelled to help keep access routes open.

Other IOM projects include bridge building, access roads, steps, drains, and slope protection work, to enable communities cope with the monsoon. The agency is also stockpiling emergency aid, such as tarpaulins, food, water and medical supplies to ensure that urgent needs of both the refugee and host communities are met. 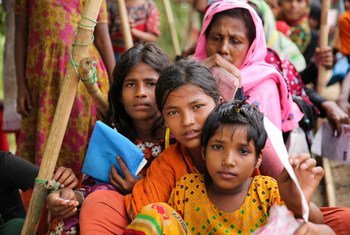