“For the people of Gaza, yesterday was a day of tragedy,” said the UN Special Coordinator for the Middle East Peace Process, Nickolay Mladenov, briefing the Council.

According to reports, he said, at least 60 people - including six children - were killed and more than 1,300 were injured on Monday in the Palestinian enclave occupied by Israel, whose troops fired live ammunition, rubber bullets and tear gas at protesters assembling along the perimeter fence.

“Israel has a responsibility to calibrate its use of force, to not use lethal force, except as a last resort, under imminent threat of death or serious injury,” Mr. Mladenov said. “It must protect its borders from infiltration and terrorism, but it must do so proportionally.”

He also called on Hamas, the militant group which controls Gaza, not to use the protests as a diversion for carrying out violent attacks at the border, and provoke Israeli forces. “Its operatives must not hide among the demonstrators and risk the lives of civilians,” he said.

Demonstrations which organizers have called “the Great March of Return” started on 30 March, building up to Tuesday’s marking of “al-Nakba” or “the Catastrophe,” by which Palestinians remember their mass displacement during the 1948-1949 war, surrounding the creation of Israel.

Mr. Mladenov said that, as part of the march, and to protest the relocation of the US Embassy from Tel Aviv to Jerusalem, an estimated 35,000 demonstrated along the fence in Gaza and hundreds joined protests in the West Bank cities of Ramallah, Bethlehem, Hebron, Jericho, Nablus, and East Jerusalem. No fatalities were reported there.

The UN official also said that Hamas and other militants had engaged in violent and provocative acts, including the placing of improvised explosive devices at the perimeter fence, which detonated by an Israeli vehicle.

Israeli security forces, Mr. Mladenov said, carried out 18 airstrikes and fired shells in the direction of 26 Hamas targets in response to attacks.

“This cycle of violence in Gaza needs to end,” the UN official said, “for if it does not, it will explode and drag everyone in the region into another deadly confrontation.”

“The international community must step in and prevent war,” he stressed.

During the ensuing debate, Nikki Haley, US Ambassador to the UN, said that violence was widespread not just in Gaza but across the Middle East, and in defence of Israel said that “the double standard is all too common in this chamber, and working overtime today.”

UN Photo/Eskinder Debebe
US Ambassador Nikki Haley addresses the Security Council on 15 May 2018.

She said that the Council should examine Iran’s role in recent attacks on Israeli positions in the Golan Heights, and missile launches by what she called Iranian proxy forces in Yemen into Saudi Arabia. Hamas terrorists, backed by Iran, have incited attacks against Israeli security forces and infrastructure, she added.

Ms. Haley argued that the US embassy move to Jerusalem reflected “the reality” that it has served as Israel’s capital since the founding of the State and it is the ancient capital of the Jewish people.

“There is no plausible peace agreement under which Jerusalem would no longer remain the capital of Israel. Recognizing this reality makes peace more achievable, not less,” she said, adding that her country is prepared to support negotiations and a peace agreement in every way – “a peace in which people of all faiths are free to worship in Jerusalem.”

European members in the Council, however, unanimously called for a negotiated settlement between the Israelis and the Palestinians on the status of Jerusalem.

The United Kingdom’s position “is clear and long-standing,” said its UN Ambassador, Karen Pierce. “Jerusalem should ultimately be the shared capital of the Israeli and Palestinian states.”

She also stressed the need for an independent, transparent investigation to “establish facts” involving Monday’s casualties, and hold those responsible to account, including the determination of whether Israel’s use of force was in line with the international law.

UN Photo/Eskinder Debeb
Riyad Mansour, Permanent Observer for the State of Palestine, addresses the Security Council on 15 May 2018.

Also addressing the Council, Riyad Mansour, Permanent Observer for the State of Palestine, described Monday’s events as an “odious massacre”, and Israel’s occupation of Palestinian land as the main source of tension.

The provocative transfer of the US embassy to Jerusalem violated Council resolutions, he said, emphasizing that no country has the right to imperil Palestinian territory under occupation, especially since the status of Jerusalem should be determined through negotiations.

“How many more Palestinians have to die before you take action?”, he asked, wondering how Council members would react if unarmed demonstrators had been killed in similar circumstances in their own countries.

“Our people have waited for a long time. We can no longer wait for an end to this injustice,” he said.

UN Photo/Manuel Elias
Danny Danon, the representative of Israel, addresses the Security Council on 15 May 2018.

Danny Danon, Israel’s Ambassador to the UN, said that Israel had disengaged from Gaza in 2005, but the enclave has never reached its potential because Hamas has taken it over following elections in 2006.  Rather than invest in education, infrastructure and the economy, the group has spent its resources on “terrorizing Israel”, he said.

The international community, with a few brave exceptions, has done nothing to stop Palestinians from terrorizing Israel, he added.

Amid the celebrations around this week’s 70th anniversary of the State of Israel, those claiming that the decision to move the US embassy to Jerusalem lay behind Palestinian violence should re-examine history, he said.

Ambassador Danon said that Palestinian claims that the embassy move had provoked demonstrations, was just another “excuse” for violence against Israel. He said the Council was obliged to “call out lies”, condemn Hamas violence and “place itself on the right side of history.” 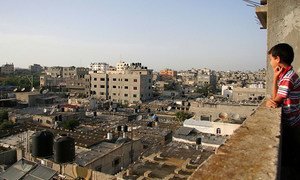 Following reports that dozens of Palestinians have been killed, demonstrating along the border of the Gaza Strip on Monday, United Nations  Secretary-General António Guterres urged both sides of the Israeli-Palestinian conflict to show restraint.