UN Photo/Beatrice Mategwa
A Rwandan peacekeeper at the UN Mission in South Sudan holds a candle during an April 2017 event to pay tribute to those who perished during the 1994 genocide in Rwanda.
11 May 2018
Peace and Security

Over the years, African governments have led the way in contributing troops and police to United Nations operations to help save lives and keep the peace around the world. Today, one of the continent’s smallest countries is also one of the largest contributors to UN peacekeeping.

Beginning with a modest contribution in May 2005 with the deployment of one military observer to the UN Mission in Sudan (UNMIS), Rwanda is currently the fourth largest contributor to UN peacekeeping operations.

After suffering its own genocide, Rwanda now contributes many personnel to missions that have protection-of-civilian mandates. There are nearly 6,550 Rwandan uniformed personnel currently serving with the UN, the majority of them in hot spots such as South Sudan, the Darfur region of Sudan and the Central African Republic (CAR).

“Peacekeeping is a noble, necessary but dangerous mission. The sacrifice and risk peacekeepers endure is always at the forefront of my thoughts,” Secretary-General António Guterres said last month during the commemoration at UN Headquarters of the International Day of Reflection on the 1994 Genocide against the Tutsi in Rwanda.

“It is particularly commendable that a nation that has endured the worst atrocities should risk its soldiers to ensure those atrocities cannot happen elsewhere,” he added.

The UN chief’s remarks were particularly poignant coming as they did just days after the killing of a Rwandan peacekeeper and the wounding of eight others during an exchange of fire with armed elements in Bangui, the capital of the Central African Republic (CAR). Overall, 53 Rwandans have lost their lives while serving with UN peacekeeping operations.

Adama Dieng, the UN Special Adviser on the Prevention of Genocide, noted that it is because the tragedy experienced on its soil that Rwanda moved quickly to send troops to places such as CAR and Darfur, where civilians were under threat.

“I can say that Rwanda knows exactly what genocide means,” Mr. Dieng told UN News in a recent interview. “That is why when I sounded the alarm in Central African Republic, in November 2013, Rwanda moved and sent troops to protect the population there.

For Inspector of Police Maurice Nyierema, who serves with the UN Mission in South Sudan (UNMISS), the genocide against the Tutsi in Rwanda has played an important part in his decision to serve as a peacekeeper.

“What happened in Rwanda makes my conviction stronger that we cannot allow something like that to happen ever again, in any place of the world,” he said.

Mr. Nyierema was among the 183 Rwandan police officers, including 30 women, who received the UN service medal in South Sudan in February of this year. The officers, based in the capital, Juba, carry out tasks such as city patrols and public order management in the UN Mission’s protection sites for civilians seeking shelter from violence.

A huge amount is at stake. Since conflict broke out in 2013, thousands of civilians in South Sudan have been killed in targeted attacks, women raped, homes and means of livelihoods destroyed. More than 1.5 million South Sudanese are living as refugees in neighbouring countries and more than 300,000 internally displaced persons (IDPs) are living under the protection of the UN Mission in Protection of Civilians (POC) sites across the country.

“People should learn to live together and to love each other, love their country and avoid divisions among themselves,” said Lt. Col. Kabera Simon, a Rwandan peacekeeper who served with UNMISS last year. “They should ignore what makes them different from each other and look at what brings them together and build their homes and nation.”

“This is my message: after war, after conflict, after misunderstanding, there is hope for the future if people are willing.”

♦ Receive daily updates directly in your inbox - Subscribe here to a topic.
♦ Download the UN News app for your iOS or Android devices.
Rwanda|peacekeeping 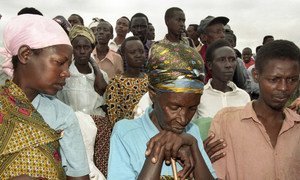 United Nations Secretary-General António Guterres on Friday urged the world to reflect on the suffering of those who perished, as well as survived, the Rwandan genocide, and resolve to prevent such atrocities from ever happening again.