FEATURE: Family of UN peacekeeper who saved hundreds of lives in Rwanda shares memories of their father, husband

On 31 May 1994, as Rwanda was descending into chaos, Captain Mbaye Diagne, a military observer at the United Nations Assistance Mission in the country (UNAMIR), was in the capital, Kigali, driving back to the base when a mortar fell near his vehicle. Just 12 days from finishing up his service, he died instantly.

On 31 May 1994, as Rwanda was descending into chaos, Captain Mbaye Diagne, a military observer at the United Nations Assistance Mission in the country (UNAMIR), was in the capital, Kigali, driving back to the base when a mortar fell near his vehicle. Just 12 days from finishing up his service, he died instantly.

In the months before his tragic death, even though as a military observer he was unarmed, Captain Diagne, of Senegal, had risked his life time and again to save hundreds people during the genocide in Rwanda. The UN honoured his courage today with the inaugural 'Captain Mbaye Diagne Medal for Exceptional Courage,' which was awarded to his family.

"In Rwanda, he called me often to tell me about the situation there. Sometimes [I even heard the shots]," remembers his widow, Yacine Mar Diop, in an interview with the UN News Centre.  "And I told him to be very careful because he had young children."

Once while on the phone, Captain Diagne passed the receiver to Rwandans he had ferried to safety in the back of his truck.

"It is your husband who saved us. He hid us here at the Hotel des Mille Collines. We are with him. We pray [hard] that the war will end," Ms. Diop said, recalling what she had been told.

The Hotel des Mille Collines became well-known after more than 1,200 people took refuge there in 1994. The story was immortalized in the film Hotel Rwanda. Beyond the Hotel's refuge, the UN estimates that more than 800,000 people were systematically murdered throughout Rwanda. The vast majority were Tutsi, but moderate Hutu, Twa and others were also targeted.

In May 2014, the Security Council created the 'Captain Mbaye Diagne Medal' to honor the military and members of the police and civilian personnel of UN and associated personnel who braved extreme danger in carrying out their duties or duties in "the service of humanity and the United Nations."

By the unanimously adopted resolution that created the Medal, the Council deeply regretted that Captain Diagne's death, his family "never received any expressions of appreciation from UN Headquarters for the sacrifices made by their distinguished family member."

He lived well 'before leaving'

Captain Mbaye was "a jovial, generous man" who "loved helping others," his widow said.

"His life was short but he lived it as if he had lived many years. He did that well before leaving," she recalled.

Ms. Diop was accompanied by a daughter, Coumba Kane Diagne, and a son, Serigne Cheikh Mbacke Diagne, who were aged four and two years old, respectively, when their father was killed.

"They say a lot about him; what he did in Rwanda, the people he saved. He was a good man," said Mr. Cheikh Diagne, who does not remember much of his father. "Our mother told us that every time he came home, he took us together, brought us to the store to buy us candy. He loved spending time with us."

His sister remembers only one of those days, "He came [and] took me in his arms [...] This is the only memory I have of him."

Ms. Diop, recalled that on 31 May 1994, it was the police who came to tell her the news, some 17 hours after her husband had died behind the wheel of his vehicle.

"The next day, we were at home waiting for the remains to come. It took five days for the body to arrive in Senegal," she said.

Since that day, Ms. Diagne raised her children alone: "I lived with my kids without their dad. This was very hard, but with the means available, I tried to educate them and get by."

"My children went two years without schooling and I know that if their dad was there, he would not have been happy. He watched their education closely," she continued.

She said the whole family feels a great sense of pride at receiving today the UN medal from Secretary-General Ban Ki-moon.

"He deserves it with everything he has done in Rwanda," Ms. Diop said. 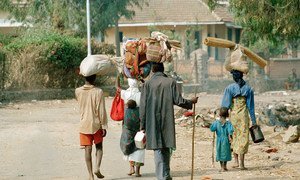 At an event marking the International Day of Reflection on the Genocide in Rwanda, United Nations Secretary-General Ban Ki-moon said the only way to prevent genocide and other “egregious” violations of human rights is to acknowledge shared responsibility and commit to shared action to protect those at risk.