At an event commemorating the Day of Vesak, United Nations Secretary-General António Guterres urged the global community to draw inspiration from the Buddha’s teachings and message of tolerance, empathy and humanism.

“The world faces numerous challenges, from conflict to climate change, from prejudice to growing inequality. We see people turning inwards and we see a crisis of solidarity,” said the Secretary-General in his address.

“The Buddha’s teachings can inspire us to become global citizens […] the Buddhist world view teaches us to see ourselves as a part of this world and not as its masters.”

Vesak, the Day of the Full Moon, generally in the month of May, is the most sacred day to millions of Buddhists around the world.

In his message, the Secretary-General highlighted Buddhism’s emphasis on non-violence as a powerful call for peace and said that the teachings of the Buddha remain very relevant in the work of the UN.

“The focus in Buddhism on the inherent dignity of life finds resonance today in our 2030 Agenda for Sustainable Development,” he said, urging everyone commit to overcome differences, care for the most vulnerable and “truly leave no one behind as we navigate the path to a better future for all.”

Speaking alongside Mr. Guterres, Miroslav Lajčák, the President of the General Assembly also underscored the importance of the “timeless principles” of Buddhism to the work of the UN.

“They offer insights and ideals on improving the condition of the planet; they show us the way to a more sustainable future. They remind us to recognise the inherent dignity of all people. They shine a light on the path to peace – peace among nations, and peace within people,” he said.

In 1999, the UN General Assembly adopted a resolution in which it recognized the Day of Vesak to acknowledge the contribution that Buddhism, one of the oldest religions in the world, has made for over two and a half millennia and continues to make to the spirituality of humanity.

♦ Receive daily updates directly in your inbox - Subscribe here to a topic.
♦ Download the UN News app for your iOS or Android devices.
Day of Vesak 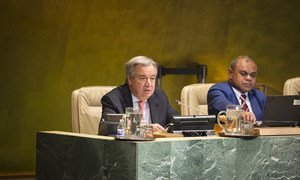 People worldwide are being encouraged by United Nations Secretary-General António Guterres to think about how they can better promote tolerance, inclusion and respect for diversity.