The United Nations Security Council is continuing its mission to Bangladesh and Myanmar, taking a first-hand look at the plight of hundreds of thousands of Rohingya refugees who have fled across the border to escape violence.

On Tuesday, the Council members will fly to Rakhine State – the epicenter of the mass displacement crisis, which has been caused by a recurring cycle of clashes between mainly Buddhist residents in the State, and Rohingya Muslims who’ve also lived there for decades.

According to the Office of the UN High Commissioner for Refugees (UNHCR), about 671,000 Rohingya refugees have fled targeted violence and serious human rights violations in Myanmar since last August.

In Rakhine, the delegation is expected to meet local government representatives and civil society.

The UN Spokesperson added that over the weekend, the Council delegation visited Bangladesh’s Cox’s Bazar, where they listened to testimony from refugees at the Kutupalong Camp.

Before departing for Myanmar early on Monday, the delegation met with Bangladesh’s Prime Minister, Sheikh Hasina, in Dhaka. 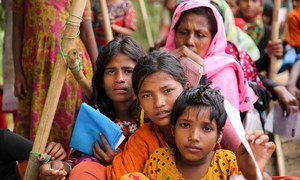