Despite warnings, Nigerian refugees and asylum-seekers who fled Boko Haram violence continue to be returned from Cameroon, the United Nations refugee agency has said, underscoring the need to accord international protection to those in need.

“We appeal once again to the authorities in Cameroon to refrain from further forced returns and to ensure protection to those fleeing insecurity and persecution in Nigeria, in accordance with Cameroon’s national and international obligations,” the Office of the UN High Commissioner for Refugees (UNHCR) said in a statement.

Since the beginning of 2018, 385 Nigerians refugees and asylum-seekers have been forcibly returned from Cameroon – the majority of them last month, including 160 on 10 April and a further 118 a week later.

In total, the UN agency has registered some 87,600 Nigerian refugees in the country.

“The forced returns are in violation of the principle of no forced returns or non-refoulement. They are also a significant setback to progress previously achieved by Cameroon in granting asylum to Nigerian civilians fleeing Boko Haram violence,” said UNHCR.

In the statement, UNHCR also noted that it recognized legitimate national security concerns of States affected by the Boko Haram crisis, and stressed that it is important that refugee protection and national security are not seen as being incompatible.

“Properly functioning screening, registration and asylum systems help safeguard host country security,” it said, reiterating its support to the Government of Cameroon to ensure that all those seeking international protection have access to efficient screening and registration procedures, as well as appropriate reception arrangements. 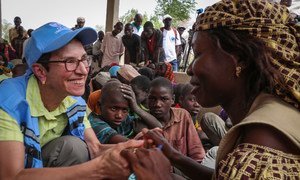 Amid growing insecurity in Lake Chad, a senior United Nations relief official on Monday said the international community and the Government of Cameroon must step up support for humanitarian action in the country, which is most affected by regionwide violence sparked by Boko Haram.