Days after an alleged chemical weapons attack in the Damascus suburb of Douma, the United Nations Security Council failed to adopt two competing resolutions that would have established a mechanism to investigate use of such weapons in Syria, as well as another concerning a fact-finding mission in the war-torn country.

Had one of the two mechanisms proposed in the drafts been approved, it could have filled the vacuum left by the Organisation for Prevention of Chemical Weapons (OPCW)-UN Joint Investigative Mechanism (JIM) when its mandate expired last November.

The first draft considered today – penned by the United States – which would have established a new investigative mechanism for one year, as well as identify those responsible for the use of chemical weapons, was rejected owing to a negative vote from Russia.

The draft received 12 votes in favour, two against (Bolivia and Russia) and one abstention (China).

A negative vote – or veto – from one of the Council's five permanent members – China, France, Russia, United Kingdom and the United States – blocks passage of a resolution.

Similarly, a competing draft – penned by Russia – which would have established the mechanism for one year as well but would have given the Security Council the responsibility to assign accountability for the use of chemical weapons in Syria, was also not adopted.

The Council rejected a third text – also proposed by Russia – which concerned the work of the OPCW Fact-Finding Mission (FFM).

Ahead of the Security Council meetings today, UN Secretary-General António Guterres had repeated his call on 15-member body to “find unity” on the issue of use of chemical weapons in Syria and ensure accountability.

“The norms against chemical weapons must be upheld. I appeal to the Security Council to fulfil its responsibility and find unity on this issue,” he said.

“I also encourage the Council to redouble its efforts to agree on a dedicated mechanism for accountability.” 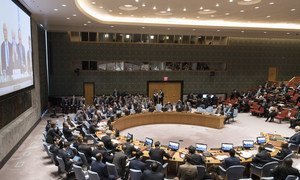 The recent escalating violence across Syria, including allegations of chemical weapons use in a Damascus suburb, could have consequences so devastating they are “difficult to even imagine,” a United Nations envoy warned Monday, calling for unity among global Powers to prevent a chain of events that could draw in actors far beyond the region.