UN celebrates voice and visibility of women and girls with autism

Activists, ambassadors and actors gathered at the United Nations on Thursday to underline their commitment to empowering women and girls with autism, a lifelong neurological condition that begins in childhood and is characterized by some degree of impaired social behaviour, communication and language.

Women and girls were the focus on  World Autism Awareness Day, observed on 2 April: a segment of the global population that faces “multiple challenges,” as UN Secretary-General António Guterres stated in his message for the Day.

Speaking at the commemorative event in the Economic and Social Council (ECOSOC) Chamber, Alison Smale, head of Global Communications at the UN, outlined some of the many forms of discrimination women and girls with autism face.

“They are denied equal access to education and employment, to healthcare services, justice and equal recognition before the law, and they are far too often denied the freedom to make their own choices,” she stated.

The UN Headquarters event included breakout panels exploring issues that have an impact on women and girls with autism such as gender disparity in diagnosis,  racism and sexism, as well as the heightened risks they face of violence, sexual exploitation and abuse.

American actress Dakota Fanning, star of the autism-themed film 'Please Stand By,' was among the panellists, who came from as far away as South Africa, Iceland and Poland.

Julia Bascom, Executive Director of the Autistic Self Advocacy Network, provided an overview of the state of women and girls with autism.

She said they are diagnosed much less frequently than men and boys, and often much later in life: sometimes only after bringing in their own children for assessment.

“The diagnostic criteria for autism are normed off of four-year-old white boys in upper middle-class families in the United States,” she reported. “So, anyone who doesn’t fit in that box has an uphill climb.”

With one child in 160 on the autism spectrum, Ambassador Mahmoud Saikhal of Afghanistan stressed the need to fight stigma and promote inclusion, but also to highlight the contributions made by people with autism.

He gave examples such as Eileen Parker, inventor of a weighted blanket that helps some people with autism to feel calm enough to fall asleep, and Dr. Temple Grandin, a leading advocate.

“Events like this help to give a voice to those who may otherwise be left behind,” he said, reading a statement on behalf of Miroslav Lajčák, the President of the UN General Assembly.

Ensuring that no one is left behind is the promise of the Sustainable Development Agenda for a more just and equitable future that world leaders have committed to bring about by 2030.

Ms. Smale, the UN official, called for giving women and girls with autism a direct role in policy making on matters that concern them.

“To achieve the inclusive society to which we aspire, we must ensure that the fundamental rights enshrined in the Convention on the Rights of Persons with Disabilities, adopted by Member States at the UN in 2006, are known and respected and are recognized as applying to everyone, including women and girls with autism,” she said.

Though based in the US, the non-profit Autistic Self Advocacy Network – Ms. Bascom’s organization – works to empower people with autism globally, under the rallying call of ‘Nothing About Us, Without Us!’

“As a society we still see autism as a negative, sad, scary thing. But for autistic women, an autism diagnosis can be a tool for empowerment,” she told the UN audience.

“It’s an answer, it’s an explanation, it’s a way out of cycles of self-blame and guilt. It’s a passport to an entire community. And if we’re lucky, it’s a connection to the understanding, support and services we need in order to truly thrive –sometimes for the first time in our lives.” 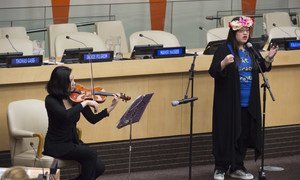 On World Autism Awareness Day, United Nations Secretary-General António Guterres has joined the global call to empower women and girls with autism and involve them and their advocates in policy and decision-making to address the challenges they face.