On World Autism Awareness Day, United Nations Secretary-General António Guterres has joined the global call to empower women and girls with autism and involve them and their advocates in policy and decision-making to address the challenges they face.

“They face […] barriers to accessing education and employment on an equal footing with others, denial of their reproductive rights and the freedom to make their own choices, and a lack of involvement in policy making on matters that concern them,” said the Secretary-General in his message on the Day.

Emphasizing that “our work for gender equality and women’s empowerment must reach all the world’s women and girls,” he stressed that the international community’s efforts to achieve the Sustainable Development Goals (SDGs) must uphold the 2030 Agenda’s core promise to leave no one behind.

The Goals and the landmark framework from which they emerged were adopted by UN Member States three years ago. Together they aim to wipe out poverty and boost equality by putting the world on a more sustainable economic, social and environmental path by 2030.

“On World Autism Awareness Day, let us reaffirm our commitment to promote the full participation of all people with autism, and ensure they have the necessary support to be able to exercise their rights and fundamental freedoms,” concluded the Mr. Guterres.

Autism is a lifelong neurological condition that manifests during early childhood, irrespective of gender, race or socio-economic status. The term Autism Spectrum refers to a range of characteristics.

The rate of autism in all regions of the world is high and the lack of understanding has a tremendous impact on the individuals, their families and communities.

The World Day is marked annually on 2 April, and this year’s official UN commemoration will be on Thursday, 5 April, with a half-day programme in New York entitled Empowering Women and Girls with Autism, that will feature a keynote address from Julia Bascom, Executive Director, Autistic Self Advocacy Network.

UN celebrates voice and visibility of women and girls with autism 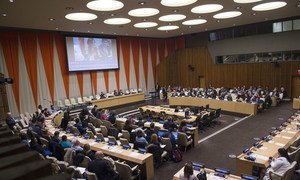 Ahead of World Autism Awareness Day, the United Nations today called for recognizing the rights of people with the spectrum neurological condition, which is believed to affect 70 million people around the world.