UNICEF/Parelkar
A woman in rural India carries containers of water to her home. Women in developing countries have to spend a lot of time fetching water due to lack of infrastructure. The decade for action on water aims to address this and other problems.

The United Nations on Thursday launched a 10-year water action plan that seeks to forge new partnerships, improve cooperation and strengthen capacity to implement the 2030 Agenda for Sustainable Development.

Most directly linked to Sustainable Development Goal 6, safe water and adequate sanitation are indispensable for healthy ecosystems, reducing poverty, and achieving inclusive growth, social well-being and sustainable livelihoods – the targets for many of the 17 Goals.

However, growing demands, poor management and climate change have increased water stresses and scarcity of water is a major problem in many parts of the world.

“By 2050 at least one in four people will live in a country where the lack of fresh water will be chronic or recurrent,” he said, speaking at the launch of the International Decade for Action: Water for Sustainable Development, 2018-2028.

“Quite simply, water is a matter of life and death. Our bodies, […] our cities, our industries and our agriculture all depend on it.”

Stressing that water cannot be taken for granted, the UN chief said that while solutions and technologies to improve water management exist, these are often not accessible to all. In many cases, end up perpetrating inequity within and among countries.

“As with most development challenges, women and girls suffer disproportionately. For example, women and girls in low-income countries spend some 40 billion hours a year collecting water,” he stressed.

Addressing these and other challenges needs a comprehensive approach to water supply, sanitation, water management and disaster risk reduction, said the UN chief, highlighting that  aligning existing water and sanitation programmes and projects with the 2030 Agenda will also be vital.

Also crucial is the political will for strengthened cooperation and partnerships, he added.

Two realities – one where no one goes thirsty; other where billions don’t have water to drink

Alongside the Secretary-General, Mahmoud Saikal, the Vice-President of the General Assembly (speaking on behalf of Assembly President Miroslav Lajčák) said that while many in the world have adequate safe drinking water and sanitation facilities, billions on the same planet lack even a basic toilet and are forced to drink water that can make them ill.

“This is the reality we all have to face. It is not pretty. But, it should not come as a surprise. We have known about it for a while,” he said.

“Luckily, we still have enough time to do something about it,” added Mr. Saikal, calling on for action on everyone’s part to capitalize on the opportunities offered by the International Decade.

Water problems? The answer is in nature

The launch of the International Decade coincides with the World Water Day, marked annually on 22 March, to focus attention to importance of and challenges facing freshwater availability.

Commemorated this year with the theme, Nature for Water, the Day urges people to explore nature-based solutions to contemporary water problems.

Some of these could include planting trees and increasing forest cover, reconnecting rivers to floodplains, and restoring wetlands to rebalance the water cycle. 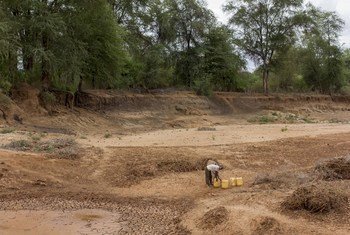