Fardin Waezi/UNAMA
The Laghman River, one of Afghanistan’s many waterways, is essential to agriculture and other development in this largely rural eastern province.

With five billion people at risk of having difficulty accessing adequate water by 2050, finding nature-based solutions, such as China’s rainwater recycling, India’s forest regeneration and Ukraine’s artificial wetlands, is becoming increasingly important, according to a United Nations report released Monday at the world’s largest water-related event in Brazil.

“We need new solutions in managing water resources so as to meet emerging challenges to water security caused by population growth and climate change,” said Audrey Azoulay, head of the UN Educational, Scientific and Cultural Organization (UNESCO), in the foreword of the UN World Water Development Report 2018.

“If we do nothing, some five billion people will be living in areas with poor access to water by 2050,” she added.

Goal 6 of the 2030 Agenda for Sustainable Development adopted by world leaders in 2015 seeks to achieve universal and equitable access to safe and affordable drinking water for all and, also access to adequate and equitable sanitation and hygiene for all by 2030.

The report notes that the global demand for water has been increasing and will continue to grow significantly over the next two decades due to population growth, economic development and changing consumption patterns.

If we do nothing, some five billion people will be living in areas with poor access to water by 2050 – UNESCO chief

The number of people at risk from floods is projected to rise from 1.2 billion today to around 1.6 billion in 2050, nearly 20 per cent of the world’s population. The population currently affected by land degradation, desertification and drought is estimated at 1.8 billion people, making this the worst natural disaster based on mortality and socio-economic impact relative to gross domestic product (GDP) per capita.

The UNESCO Director-General said the report proposes solutions that are based on nature to manage water better.

The report notes that reservoirs, irrigation canals and water treatment plants are not the only water management instruments at disposal.

In 1986, the province of Rajasthan in India experienced one of the worst droughts in its history. Over the following years, a non-governmental organization worked alongside local communities to regenerate soils and forests in the region by setting up water harvesting structures. This led to a 30 per cent increase in forest cover, groundwater levels rose by several metres and cropland productivity improved.

China's Sponge City aims to recycle 70 per cent of rainwater

Faced with an ever-increasing demand for water, China recently initiated a project, entitled ‘Sponge City,’ to improve water availability in urban settlements with the aim of recycling 70 per cent of rainwater.

Over recent years, Ukraine has been experimenting artificial wetlands to filter some pharmaceutical products from wastewater based on evidence that wetlands alone can remove 20 to 60 per cent of metals in water and trap 80 to 90 per cent of sediment from runoff.

“For too long, the world has turned first to human-built, or ‘grey,’ infrastructure to improve water management. In so doing, it has often brushed aside traditional and indigenous knowledge that embraces greener approaches,” writes Gilbert Houngbo, Chair of UN-Water and President of the International Fund for Agricultural Development (IFAD) in the foreword of the report.

Despite emerging initiatives, the use of nature-based solutions remains marginal and almost all investments are still channelled to grey infrastructure projects, the report points out.

The report is the fruit of collaboration between the 31 UN entities and 39 international partners that comprise UN-Water.

The report, whose publication coincides with World Water Day annually observed on 22 March, was presented at the World Water Forum, which kicked off Monday and runs through Friday in Brasilia.

The Forum aims “to promote awareness, build political commitment and trigger action on critical water issues at all levels.”

Also on 22 March, the UN will launch the International Decade for Action: Water for Sustainable Development 2018 to 2028, which aims to further improve cooperation and capacity-building towards the SDGs. 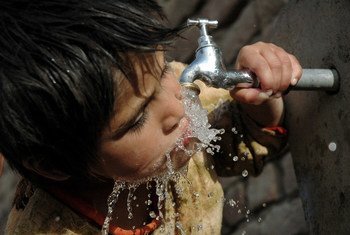 With 700 million people worldwide at risk of being displaced by intense water scarcity by 2030, water infrastructure investment must be at least doubled over the next five years, a panel set up by the United Nations and the World Bank recommended on Wednesday.