UN Photo/Loey Felipe
Wide view as Jonathan Guy Allen, Deputy Permanent Representative of the United Kingdom to the UN, addresses the Security Council meeting considering the letter dated 13 March 2018 from the UK to the Council regarding the 4 March chemical attack in Salisbury.

During a heated debate in the United Nations Security Council on Wednesday, the United Kingdom said that it was “highly likely” that Russia was behind an attack using a deadly nerve-agent, which has left Sergei Skripal and his daughter, Yulia, hospitalized in critical condition.

The accusation was met with a firm denial from the Russian Ambassador to the UN, Vassily Nebenzia, who said that a letter sent by British Prime Minister, Theresa May, to the President of the Security Council, outlining the attack, constituted a “threat to a sovereign State.”

The UK Deputy Permanent Representative, Jonathan Allen, said that Russia was “in serious breach of the Chemical Weapons Convention (CWC)” through its failure to disclose the existence of the Soviet-era Novichok programme – the name of the nerve agent which the UK says was used in the attack on Sergei Skripal and his daughter, in the English city of Salisbury, on 4 March.

The pair were found unconscious on a bench and taken to hospital where they remain in a critical condition.

The UK Prime Minister wrote to the Council on Tuesday, saying that following a “thorough investigation,” either the Russian Government was behind the attack, or alternatively, had lost control of the nerve agent to a non-State actor.

The Convention, which came into force in 1997, outlaws the production, stockpiling, and use of chemical weapons and their precursors.

United Nations
Jonathan Allen, Deputy Permanent Representative of the United Kingdom speaks to reporters about the use of a nerve agent in Salisbury on 4 March.

Mr. Allen told the Security Council that the UK had called in the Hague-based Organisation for the Prohibition of Chemical Weapons (OPCW), the UN-backed body which works to implement the Convention and eliminate chemical weapons use, and the threat of their use.

He said that the attack was “an unlawful use of force” and a violation of the UN Charter, which had potentially exposed hundreds of British citizens to the nerve agent.

The deputy Ambassador added that the UK was asking the OPCW to independently verify the use of the agent.

Also invoking the primary investigative and verification role of the OPCW in the case, Ambassador Nebenzia, for Russia, said that his country had asked the UK for samples of the nerve agent, and offered to conduct a joint investigation.

He denied the existence of any Novichok programme and said that the most probable source of the nerve agent were countries that continued their research on such weapons, which include the UK, he added.

In her statement to the Council, Ambassador Nikki Haley of the United States, said that the US stood in solidarity with the UK in denouncing the “crime” and believed Russia had been responsible for the attack.

It was part of an “alarming increase” in the use of chemical weapons she added, citing their use during the long-running conflict in Syria, as identified by the OPCW-UN Joint Investigative Mechanism.

Permanent Representative for France, François Delatrre, said his country placed full confidence in the UK investigation, and that the perpetrators had to be identified and prosecuted.

Rounding off the statements on behalf of the five permanent Council members, China’s Ambassador, Ma Zhaoxu, said his country hoped an impartial investigation would be held, based on the facts and on international law.

Earlier in the day, Farhan Haq, the Deputy UN Spokesman, told reporters that Secretary-General António Guterres was deeply concerned over the reported use of a nerve agent in the United Kingdom. The UN chief conveyed his sympathies to those who have been harmed and expressed his sincere hope for their early recovery.

“The use of nerve agents as a weapon, under any circumstances, is unacceptable, and its use by a State would constitute a serious violation of international law,” the deputy spokesman said, adding that while the Secretary‑General was not in a position to attribute responsibility, “he strongly condemns the use of any nerve agent or chemical weapons and hopes that the incident will be thoroughly investigated.”

UPDATE: According to news reports, the UK Foreign Ministry announced on Sunday, 18 March, that independent investigators from the OPCW will arrive in the UK on Monday, 19 March to kick off their investigation into the nerve agent used in the Salisbury attack. 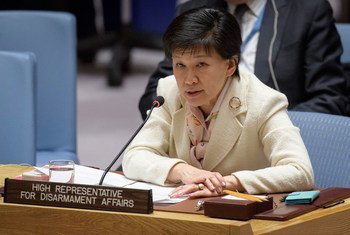 Proof of chemical weapons use in Syria should be met with ‘meaningful response,’ urges UN disarmament chief

Evidence of the use, or likely use, of banned chemical weapons in Syria should be met with a “meaningful response” within the Security Council, the United Nations disarmament affairs chief said on Monday.