UNIC/Mexico
A protest rally in Mexico City on the case of Ayoitzinapa rural school attended by the 43 disappeared students..

The United Nations human rights wing said Thursday that it has strong grounds to believe that the investigation into the disappearance of 43 students from a rural Mexican college in 2014 was marred by torture and cover-ups.

By reviewing the cases of 63 individuals prosecuted in connection with the students’ disappearance from Ayotzinapa Teachers’ College in Guerrero, the Office of the UN High Commissioner for Human Rights (OHCHR) shed light on some of the flaws of the early stages of the investigation, rather than addressing who were responsible for the crime.

In the report, titled Double Injustice – Human rights violations in the investigation of the Ayotzinapa case, OHCHR said it has solid grounds to conclude that at least 34 of these individuals were tortured, based on the judicial files, including medical records of multiple physical injuries, and on interviews with authorities, detainees and witnesses.

Ayotzinapa is a test case of the Mexican authorities’ willingness and ability to tackle serious human rights violations.

“The findings of the report point to a pattern of committing, tolerating and covering up torture in the investigation of the Ayotzinapa case,” said UN High Commissioner for Human Rights Zeid Ra’ad Al Hussein.

“This not only violates the rights of the detainees, but also the right to justice and to truth for the victims of the events of September 2014, their families, and for society as a whole,” he added.

The report highlights how people were arbitrarily detained and tortured to extract information or confessions, and the significant delays in bringing them before a public prosecutor, often placing them outside the protection of the law.

The report states that the internal oversight unit of the Office of the Attorney-General of the Republic (OAG) appeared to have made a genuine effort in 2016 to address some of alleged torture or other human rights violations, but this internal investigation was subsequently thwarted by the replacement of the officials in the unit. To date, there has been no prosecution and sanction for the acts of torture or other human rights violations, the report says. 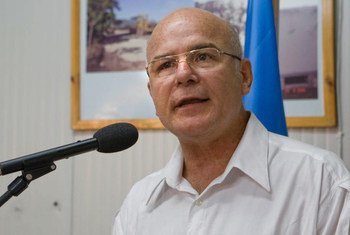 24 November 2017
Strongly condemning the attack on a state-level Ombudsperson and his family in Mexico, the United Nations expert on human rights defenders has called on the authorities to investigate the incident and bring the perpetrators to justice.