This news comes after the UN and other humanitarian agencies were forced on Monday to leave after nine hours in Douma amid ongoing shelling in east Ghouta and the Syrian capital, Damascus. Only 10 trucks were fully unloaded while four were partially unloaded.  As a result, half of the food for 27,500 people was not delivered.

The ongoing hostilities, he said, are endangering civilians and preventing humanitarian assistance from reaching hundreds of thousands of people in need, including thousands of vulnerable children.

“The complete assistance to reach a total of 70,000 people in Douma, including medical and health supplies, still needs to be delivered,” he explained.

More than 100 people have been killed in the enclave in the past 48 hours, said Mr. Dujarric, adding that since 24 February, when the UN Security Council adopted a resolution demanding a cessation of hostilities throughout Syria, hundreds of people have reportedly been killed and thousands injured due to air and ground strikes.

“The UN remains ready to deliver assistance to all people in need in Douma, other areas in east Ghouta and other hard-to-reach and besieged areas as soon as conditions allow,” said Mr. Dujarric, adding that the UN continues to call on all parties to immediately allow safe and unimpeded access for further convoys to deliver critical supplies to hundreds of thousands of people in desperate need of humanitarian assistance.

UN News spoke to Marwa Awad, communications officer for the World Food Programme (WFP), based in the Syrian capital, who said the escalation and fighting in besieged and hard-to-reach areas has paralysed the UN's response and WFP's ability to reach those who desperately need help.

“A case in point is the UN and partners inability to return to Douma in east Ghouta today because the movement of the convoy was not authorized due to security concerns on the ground,” she said.

The UN estimates that some 400,000 people are trapped in the towns and villages of east Ghouta and Secretary-General António Guterres, who has been calling for the ongoing siege to be lifted, has described the conditions there as “hell on earth.”

♦ Receive daily updates directly in your inbox - Subscribe here to a topic.
♦ Download the UN News app for your iOS or Android devices.
syria|Ghouta 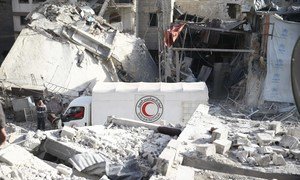 United Nations Secretary-General António Guterres has called on parties to the conflict in Syria to allow a humanitarian convoy to complete the delivery of supplies to Douma in eastern Ghouta planned for Thursday.