UNICEF/UNI126514/Khan
A child stands beside a wall at his family's home in rural Bangladesh.
6 March 2018
SDGs

Latest data on development progress for children reveals that more than half a billion live in countries where the Sustainable Development Goals (SDGs) are “quickly falling out of reach,” the United Nations Children’s Fund (UNICEF) warned on Wednesday.

“More than half the world’s children live in countries where we either can’t track their SDG progress, or where we can and they are woefully off-track,” said Laurence Chandy, UNICEF Director for the Division of Data, Research and Policy.

The 17 Goals, set by the landmark 2030 Agenda for Sustainable Development, are the framework for creating a future of peace, dignity and prosperity for all on a healthy planet, by 2030.

Early assessment of progress toward achieving the SDGs confirms an alarming lack of data in 64 countries, as well as insufficient progress in 37 countries where the data can be tracked.

UNICEF’s Progress for Children in the SDG Era, is the first thematic performance assessment report toward achieving the global targets that concern children and youth.

The report raises the alarm that 520 million children live in countries that lack data on at least two-thirds of child-related SDG indicators, or lack sufficient data to assess their progress – rendering those children effectively “uncounted.”

Where sufficient data is available, the scale of SDG target challenges remains daunting.

The report warns that without accelerated progress, 650 million children live in countries where at least two-thirds of the SDGs are either out of reach or whose lives could actually be worse by 2030.

The report tracks five fields of progress – health; learning; protection from violence and exploitation; a safe environment; and equal opportunity – and quantifies in human costs how far the world is currently expected to fall short of the global goals.

Projections show that between now and 2030 ten million additional children would die of preventable causes before their fifth birthday and 31 million would be stunted, due to lack of adequate nutrition.

Moreover, 22 million children would miss out on pre-primary education; 150 million girls would marry before their 18th birthday; and 670 million people, many of them children, will still be without basic drinking water.

“Two years ago, the world agreed on an ambitious agenda to give every child the best chance in life, with cutting-edge data analysis to guide the way,” said Mr. Chandy. “And yet, what our comprehensive report on SDG progress for children reveals plainly is an abject lack of data,” he added.

While renewing efforts to address the global data-deficiency, the report calls for recognizing that strong national data institutions and capacity take time and investment to develop.

While each government is ultimately accountable to generate the data that will guide and measure achievement of the goals, the international community has an obligation to partner with them to make sure the SDG targets are met.

“Most countries do not have the information even to assess whether they are on track or not. Children around the world are counting on us – and we can’t even count all of them,” he concluded.

No improvement in young children’s diets over past decade: UNICEF

This World Children’s Day, ‘reimagine a better future’, for every child 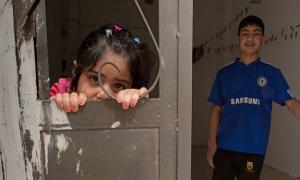 Eighty five per cent of Syrian refugee children in Jordan are living below the poverty line and a staggering 94 per cent of those under five in “multidimensional” poverty,  meaning that they are deprived of some of the most basic needs such as education, health or protection, an assessment by the United Nations Children’s Fund (UNICEF) has revealed.