If it were a new crisis, it would be one of the biggest in the world, but despite the fact that more than five million people need aid, Sudan is at risk of falling off international donors’ radar, a senior United Nations official has said.

“If it were a new crisis, the dimensions of it, the scale and the need of it, would be such that it would be one of the biggest crises in the world,” Marta Ruedas, United Nations Resident and Humanitarian Coordinator in Sudan told UN News.

“But nobody realizes that because it’s been going on for so long. The need is there, but the response is no longer the same. And we need to have people respond to it as the need requires, rather than with fatigue, which is somewhat understandable.”

Some 5.5 million people in Sudan require humanitarian support, including 3.1 million in the province of Darfur. Fighting in that region, which is about the size of Spain, has displaced millions of people since 2003. During the past year, there has been sporadic new conflict, but the country has seen the arrival of new refugees from South Sudan, and it now hosts some 770,000 refugees from its southern neighbour.

“The refugees coming across the border are coming in a really bad state. They require a lot of support and we’re just not getting enough [support],” Ms. Ruedas said, adding: “Some have died reaching the border.”

The UN and its humanitarian partners are appealing for $3 billion to assist South Sudanese refugees and displaced persons. Some $1.5 billion is meant to aid host communities and agencies helping South Sudanese refugees in neighbouring countries, including $327 million for Sudan. The focus is on boosting food and water rations, and providing health services.

The greatest percentage of the people in need are displaced Sudanese, who require some assistance getting food and livelihood support, education, water, sanitation and health services. The Government says nearly 400,000 people, including internally displaced persons (IDPs) and refugees, have returned to their homes, but the majority continue to report that conditions are not in place – including security and access to services – to return to their homes. Many may prefer to be integrated into the communities where they are currently living.

“Some people have been in camps for nearly two decades, and we still call them displaced but really, it’s people who have been living in the same location for 10 years, 15 years,” said Ms. Ruedas.

“We should be able to either integrate them where they are living – because some of these places are like suburbs of a community – or if they do want to go back, and they can return to their place of origin, then we should be able to do that; establish them there and take them off the books of those internally displaced.”

The 2018 humanitarian appeal for Sudan, which requests $1b to aid 4.3 million people, will be released in the coming weeks. The 2017 humanitarian appeal was only 46 per cent funded, the first time less than half of requested funding was received since the start of the Darfur crisis in 2003.

“Sudan has been on the books of donors – their humanitarian ledger – for so long that donor fatigue is setting in. But just because it has been going on for years doesn’t mean that the need is less,” Ms. Ruedas said.

♦ Receive daily updates directly in your inbox - Subscribe here to a topic.
♦ Download the UN News app for your iOS or Android devices.
Sudan|Darfur 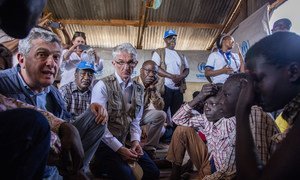