Filippo Grandi, the UN High Commissioner for Refugees, together with UN Emergency Relief Coordinator, Mark Lowcock, launched a $3.2 billion appeal to help those forced to flee their homes, as fighting continues across the world’s youngest country.

They are appealing for $1.5 billion to support refugees who have fled across the border into six neighbouring countries, including Uganda, Kenya, Sudan, Ethiopia, the Democratic Republic of the Congo (DRC) and Central African Republic (CAR).

A further $1.7 billion is needed to help those internally-displaced by the fighting, which has fuelled famine conditions, and a humanitarian crisis since conflict broke out between forces loyal to the President and Vice-President, in 2013.

Mr. Grandi said the violence was “purging South Sudan of the people who should be the greatest resource of a young nation.”

“They should be building the country, not fleeing it,” he added.

Mr. Grandi and Mr. Lowcock, who is also the UN Under-Secretary-General for Humanitarian Affairs, have been visiting newly-arrived refugees from the country, in UNHCR’s Kakuma refugee camp, in northern Kenya.

Mr. Lowcock said that the conflict had taken a “brutal and deadly toll” and it was “in the interests of everyone to continue to provide generous and continuous support” to the refugees.

There are nearly 2.5 million South Sudanese who have already fled the country, and around seven million need humanitarian assistance.

♦ Receive daily updates directly in your inbox - Subscribe here to a topic.
♦ Download the UN News app for your iOS or Android devices.
refugees|Kenya 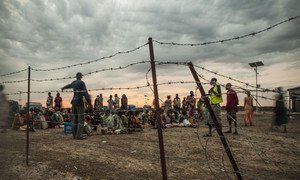 While the signing last month of a ceasefire accord among South Sudan’s warring parties is a great stride forward, it is just a first step toward peace and stability, the United Nations peacekeeping chief said Wednesday, warning that the 21 December deal has already been violated numerous times.