OCHA/Ahmed ben Lassoued
Two unrelated children, one eight and the other ten, share a bed at a cholera treatment centre in Sana'a, Yemen, due to lack of resources.
13 February 2018
Humanitarian Aid

Amidst ongoing conflict, the collapse of basic services and economic decline in Yemen, the United Nations aid chief welcomed a substantial humanitarian pledge from Saudi Arabia and the United Arab Emirates.

“I reiterate the Secretary-General’s statement welcoming the generous $1 billion pledge by the Kingdom of Saudi Arabia and the United Arab Emirates (UAE) to support humanitarian action in Yemen, as well as their commitment to raise an additional $500 million from other donors in the region,” UN Emergency Relief Coordinator Mark Lowcock said Tuesday.

Saudi Arabia and the UAE agreed with the UN that $930 million would be transferred by 31 March, in support of the 2018 Yemen Humanitarian Response Plan (YHRP) – with the clear stipulation that the funds be used on humanitarian need alone.

The two countries would also provide an additional $70 million to support port rehabilitation and infrastructure in the country as part of the Yemen Comprehensive Humanitarian Operations Plan issued by the Saudi-led coalition in January 2018.

The funds represent almost one-third of the YHRP $2.96 billion requirement.

“Once converted,” Mr. Lowcock said, “the pledge will reduce hunger, contain disease, maintain essential health, water and education services and relieve the suffering of millions of Yemenis across the country.”

“If fully funded,” he continued “the UN and its partners will provide, among other assistance, emergency food to more than 8.5 million Yemenis, nutritional services to 5.6 million children, pregnant women and mothers, and safe water to 5.4 million people.

The UN and its partners will also rehabilitate more than 1,400 schools and 650 health facilities destroyed by the ongoing conflict.

Mr. Lowcock thanked both countries for moving forward with the “generous and much needed infusion of funds.”

“I hope this generosity will encourage more donors to contribute to the YHRP, including ahead of the international pledging conference on Yemen to be held in Geneva on 3 April,” he added.

A record 22.2 million people are now in need of humanitarian assistance – 3.4 million more than last year.

“I call on all parties to the conflict to respect international humanitarian law by protecting civilians and civilian infrastructure and facilitating rapid, safe and unfettered humanitarian access to Yemen and within the country,” stressed Mr. Lowcock, who is also the UN Under-Secretary-General for Humanitarian Affairs.

While brave humanitarians are committed to saving lives, only a political solution and an end to the conflict will stop the suffering of the Yemeni people.

“We renew our call on all parties to cease hostilities and to engage meaningfully with the United Nations to achieve a lasting political settlement,” concluded Mr. Lowcock. 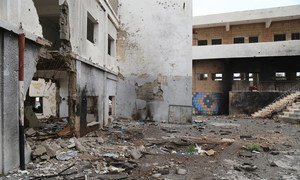 Raising alarm over continuing civilian casualties in the midst of increased hostilities in war-ravaged Yemen, the United Nations human rights chief underscored that all parties to the conflict are obliged under international humanitarian law to ensure that civilians are not harmed.