Over 22,000 desperate Congolese refugees crossed Lake Albert to Uganda last week, with four drowning when their boat capsized on the perilous journey from the conflict-hit eastern regions of the Democratic Republic of the Congo.

More than 22,000 desperate Congolese refugees crossed Lake Albert to Uganda last week, with four drowning when their boat capsized, the United Nations reported Tuesday, warning that even more lives could be lost on often-perilous lake routes from the conflict-hit eastern regions of the Democratic Republic of the Congo (DRC).

“The refugees either use small canoes or overcrowded and rickety fishing boats, often carrying more than 250 people and taking up to ten hours to cross,” Babar Baloch, spokesperson for the Office of the UN High Commissioner for Refugees (UNHCR) told reporters in Geneva, Switzerland.

“Overloaded with luggage and fishing nets, the small canoe, which was carrying the four refugees who drowned on 11 February, had paddled for nearly two days when it was hit by high waves, causing the passengers to fall overboard,” he added.

Since the beginning of the year, some 34,000 Congolese have arrived in Uganda.

UNHCR staff have reported several other incidents of boats going adrift due to engine failure or insufficient fuel, prompting rescue operations by the Ugandan authorities.

On 7 February, UNHCR partners recorded two more deaths at the DRC shores of Lake Albert – which spans the border into Uganda – where thousands of people are waiting to cross, as some wrangled to get onto the boats.

With attacks on villages in the DRC province of Ituri continuing over the weekend, UNHCR calls for increased humanitarian access to the area, to cover the population’s enormous protection and assistance needs.

Refugees crossing to Uganda talk of growing attacks against civilian populations, as well as killings and destruction of private property. UNHCR staff also received many reports of civilians being hacked to death and killed with arrows.

UNHCR works with the Ugandan authorities for the registration and the relocation of the new arrivals to settlements further inland. However, more support is needed to face the demanding situation.

Among the critical priorities is the preparation of new settlement areas, together with psycho-social interventions to help refugees overcome their trauma.

Meanwhile, crossings through Lake Tanganyika towards Burundi and Tanzania declined significantly last week, currently reaching some 8,000 and 1,200 respectively. Army advances against the armed groups inside DRC, as well as a dwindling supply of readily available fishing boats and canoes, may have contributed to the drop in new arrivals.

However, UNHCR is afraid that flows could soon pick up again, given the unpredictable and volatile nature of the conflict.

Over the past year, some 120,000 Congolese fled to neighboring countries, joining the 510,000 refugees that were already in exile. With Congolese refugee flows to neighboring countries expected to further increase in 2018, UNHCR is urging donors to step up their support. Of the $368.7 million that UNHCR has requested for the DRC refugee situation, only one per cent has been funded so far.

♦ Receive daily updates directly in your inbox - Subscribe here to a topic.
♦ Download the UN News app for your iOS or Android devices.
Uganda|Democratic Republic of the Congo 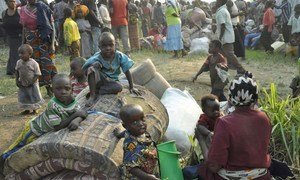