United Nations Secretary-General António Guterres on Monday congratulated the United States and Russia on successfully reducing their strategic nuclear forces to the level required by a new bilateral treaty signed in 2010, calling on both sides to engage in the necessary dialogue that will lead to further arsenal reductions.

“The Secretary-General stresses that at a time when global anxieties about nuclear weapons are higher than at any time since the Cold War, efforts in nuclear disarmament, non-proliferation and arms control are more vital than ever,” said a statement issued by his Spokesman Stéphane Dujarric.

“These endeavors can play significant roles in building trust and confidence, and preventing, mitigating and resolving conflicts,” the statement added.

Known as “New START,” the Treaty on Measures for the Further Reduction and Limitation of Strategic Offensive Arms reduces deployed nuclear weapons to 700 delivery vehicles and 1,550 warheads.

It is a part of a series of bilateral nuclear arms control agreements between the two nations that “have significantly reduced the dangers posed by nuclear weapons and are steps towards the common aspiration of a world free of nuclear weapons,” the statement noted.

Mr. Guterres called on them “to engage in the necessary dialogue that will lead to further arsenal reductions” and “to continue to display the historic leadership across the multilateral disarmament agenda that has proven so valuable to our collective security,” the statement said.

♦ Receive daily updates directly in your inbox - Subscribe here to a topic.
♦ Download the UN News app for your iOS or Android devices.
disarmament|nuclear non-proliferation 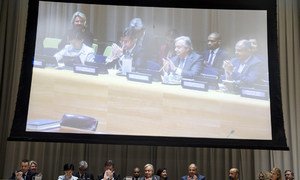 Congratulating the International Campaign to Abolish Nuclear Weapons (ICAN) on being awarded today the 2017 Nobel Peace Prize, top United Nations officials said that the recognition is a reminder of the need to grim threats posed by such weapons to humanity.