Hostilities in Syria continues to drive hundreds of thousands from their homes and the number of displaced in the seemingly unending conflict continues to rise along with the suffering of affected communities, the United Nations deputy humanitarian chief said Tuesday, calling on all parties to ensure the safety and protection of civilians caught up in the violence.

Ursula Mueller, the Deputy UN Emergency Relief Coordinator, said the situation is most concerning in north-west Syria where recent fighting has claimed many lives and forced over 270,000 civilians to flee for safety.

“Camps for the displaced are overstretched, forcing most of those displaced to seek shelter in some 160 makeshift settlements. During these cold and wet winter months, many families have nothing else than improvised tents which they share with others,” said Ms. Mueller, briefing a Security Council meeting on the humanitarian situation in the war-torn country.

Elsewhere in Syria, fighting in Afrin (in Aleppo governorate) where on one hand, some 16,000 people have been displaced, but at the same time, civilian movement has reportedly been restricted by local authorities, particularly for those wishing to leave the area.

The situation is equally concerning in eastern Ghouta and in areas of Damascus where at least 81 civilians – including 25 women and 30 children – were killed in the first ten days of January.

Ms. Mueller also informed the Security Council that although in late December, 29 patients in need of urgent medical care were allowed out of eastern Ghouta, hundreds more – most of them women and children – require immediate medical attention.

“So far, there have been 21 civilian deaths among those needing medical evacuation. Their needs are critical, and the law is clear,” she said, calling on all parties and all those with influence over the parties, “to see to it that all such medical evacuations take place without conditions and without delay.”

In the midst of the catastrophe, relief workers delivering life-saving assistance continue to face considerable challenges, including access to those in need of assistance.

Last month, none of the UN cross-line convoys could reach besieged locations and only two convoys reached hard-to-reach areas. This month, UN and partners have had no access to any such locations at all, stressed Ms. Mueller.

“Not one convoy has been able to deploy. Discussions about convoys have stalled over requirements to lower the number of beneficiaries, and splitting convoys in a way that would not allow us to provide food or other essential items,” she said, noting also issues in other parts of the country preventing delivery of aid.

“Our deliveries must continue to be based on humanitarian principles and international humanitarian law, impartially based on civilian need,” reiterated the senior UN official.

Our deliveries must continue to be based on humanitarian principles and international humanitarian law, impartially based on civilian need —UN deputy aid chief Ursula Mueller

Noting five key areas where the UN is looking to make concrete progress, she called for urgent funding for the Organization’s Syria humanitarian response plan for 2018.

Ms. Mueller also called for an urgent agreement on medical evacuations and assistance for those trapped in eastern Ghouta and other besieged areas of Syria. She further underlined the need for improved humanitarian access; and for an agreement on UN-supported aid convoys from Damascus to Rukban in south-eastern Syria.

“Fifth, more effective arrangements to enable the UN to support the work of Syrian nongovernmental organizations (NGOs), and to enable international NGOs to play the stronger role they can and are ready to play in relieving the suffering,” she said.

Meanwhile, talks sponsored by Russia on a political solution towards ending the seven-year Syrian conflict concluded today in Sochi.

Speaking to the press in New York, via telephone from Sochi, Staffan de Mistura, the UN Special Envoy for Syria said that the main outcome of the talks was the declaration to set up a committee that will draft a new constitution for the war-torn country under the auspices of the UN-led Geneva process.

The committee’s mandate, terms of reference, powers, rules of procedure and selection criteria for its composition will be decided by parties to the Geneva talks based on proposals made by the Special Envoy.

Mr. de Mistura further clarified that each of the guarantors – Russia, Iran and Turkey – will provide about 50 names which could be considered as, in his terms, “candidates for such a committee” but the body will “very likely” be composed of 45 to 50 members at a maximum.

“I plan to consult widely, including those who did not attend the conference [in Sochi] and consistently with Security Council resolution 2254 (2015), will prepare a list of 45-50 people based on criteria that will be soon announced by me in Geneva, based on very wide consultations,” he added, elaborating on the declaration announced by the participants at the conference.

“The devil is in the detail [and] the job ahead is complicated – we always knew it – but we believe we can build on it,” expressed Mr. de Mistura. 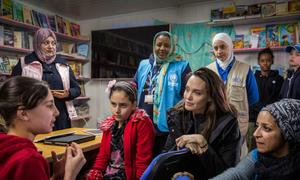 Peace in Syria must be built on dignity, human rights for all Syrians, UNHCR envoy Angelina Jolie