Following Sunday’s military operations in Syria’s east Ghouta, which claimed 30 lives, including women and children, reliable reports indicate that fighting continued and that shelling between East Ghouta and Damascus was ongoing in both directions, the United Nations humanitarian wing reported Tuesday.

“The UN is ready to move convoys into East Ghouta, and to evacuate hundreds of casualties, as soon as security conditions permit,” Jens Laerke, spokesperson for the Office for the Coordination of Humanitarian Affairs (OCHA), told reporters at Tuesday’s regular press briefing in Geneva.

“In the current situation, that is not possible,” he added.

Responding to questions, Mr. Laerke said that what people in East Ghouta and throughout Syria urgently needed is “the immediate implementation of the 30-day ceasefire, in accordance with the recent Security Council resolution,” calling on all sides involved of the conflict to abide by its terms.

“Actions, not words, are needed to save lives in East Ghouta” he stressed. “Only a change in the situation on the ground will enable lifesaving programmes to be implemented.”

Mr. Laerke maintained that if the Security Council-mandated ceasefire is not observed by all the warring parties, there can be no genuine cessation of hostilities.

At the same time, Alessandra Vellucci, Director of the UN Information Service in Geneva, said the Organization was ready to act but “had to be sure that there were no obstacles, physical or administrative standing in its way.”

She echoed Mr. Laerke in saying that a ceasefire required the full implementation of the Council’s resolution, reminding the press that it had been passed unanimously and needs to be fully implemented.

For his part, World Health Organization (WHO) spokesperson Tarik Jašareviæ said that a medical evacuation plan for East Ghouta had been drawn up in 2017, noting that “if and when the plan was implemented, the Syrian Red Crescent Society would be taking the leading role.”

In response to a question,  Mr. Jašareviæ said that more than 1,000 names had been listed of potential evacuees from East Ghouta – some 600 of whom had been classified as moderate or severe cases.

Mr. Laerke, added that Syrian government authorities would be involved when the evacuations took place.

Responding to a question on the safety of persons being evacuated, Mr. Laerke said that all humanitarian actors agreed that the only way to guarantee their safety was for all sides in the fighting to accept the terms of the ceasefire. 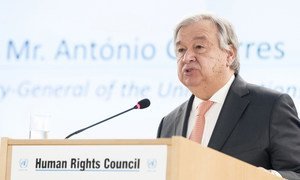