A record 4.1 billion passengers took to the skies in 2017 onboard some 37 million scheduled flights globally, the United Nations civil aviation agency reported Thursday, highlighting that the fastest growth was seen among low-cost carriers.

According to preliminary figures released by the UN International Civil Aviation Organization (ICAO), air travel demand growth too gained “solid momentum” on the back of improved global economic conditions throughout the year.

“The upward trend was driven by the strengthening investment in advanced economies as well as the recovery in emerging market and developing economies owing to the increased export demand,” said the UN agency.

It added that lower air fares owing to the low fuel price also continued to stimulate traffic growth, albeit at a more moderate level compared to 2016.

In terms of geographic distribution, Europe remained as the largest international market (37 per cent of the global total), recording a strong 8.1 per cent growth over the previous year. Asia-Pacific came in second with 29 per cent and growth of 9.6 per cent over 2016.

North America accounted for a 13 per cent global share, and demonstrated but notched up the slowest growth as a region (4.9 per cent over 2016).

The Latin America and the Caribbean region bagged 4 per cent of the international traffic and saw the largest improvement among all regions at 10 per cent. Africa had the smallest traffic share three per cent, grew slightly faster than last year at 7.6.

The ICAO news release also reveals that low-cost carriers consistently grew at a faster pace compared to the world average growth, carrying an estimated 1.2 billion passengers and accounting for approximately 30 per cent of the world total scheduled passengers.

At the same time, bolstered by improving global economic conditions and world trade, air cargo demonstrated a strong rebound in 2017, recording a “robust” 9.5 per cent growth, a “significant improvement” from the 3.8 registered in 2016.

ICAO also reported that in 2017, average jet fuel prices increased by about 25 per cent compared to 2016 but remained significantly lower than the prices observed for the ten years prior to 2016.

According to the UN agency, finalized figures will be released in July. 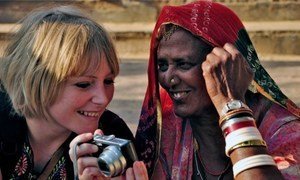 By 2030, there could be 1.8 billion tourists – just over one in five persons in the world – travelling around the globe, the United Nations World Tourism Organization (UNWTO) has said.