“I am extremely happy to see the enthusiasm and commitment of the authorities, of the communities, and of the ex-combatants to the process of peace building in Colombia,” Mr. Guterres said in a statement to the press from Mesetas, Meta, where he visited a territorial area for the training and reintegration of former Revolutionary Armed Forces of Colombia (FARC) combatants.

“I had the opportunity to visit a FARC camp and to see the ex-combatants build their future and develop new activities – activities of peace – with great enthusiasm,” he said.

Mr. Guterres said that “the communities also believe that it is possible for this region to achieve not only peace, but also prosperity and good living conditions for all its inhabitants” and that the Colombian Government will play a key role in providing the security, administration, healthcare system and infrastructures they need, and in helping the local farmers get better access to the market.

It is possible for this region to achieve not only peace, but also prosperity and good living conditions for all its inhabitants

“What we see here is an extraordinary transformation, and it gives me great hope for the future and for the peace process in Colombia,” he stressed, reaffirming the UN's full support and solidarity with the Colombian people in this historic moment of their lives.

The purpose of Mr. Guterres' visit to Colombia is to take stock of achievements that followed a peace agreement between the Government and the FARC in November 2016, which ended 50 years of conflict.

The UN chief also seeks to reinvigorate the implementation of the peace deal, including the process of reintegrating former rebel combatants into society, and ensure that Colombians are committed to stay the course.

VIDEO: Secretary-General António Guterres stresses the UN’s solidarity and commitment to the peace process in Colombia.

His visit also comes ahead of legislative elections in March and presidential elections in May, and at a time when a temporary ceasefire agreement between the Government and another rebel group, the National Liberation Army (ELN), has just expired.

Back in the capital, Bogotá, the UN chief spoke to reporters before wrapping up his two-day visit and expressed his concern about the violent events that took place following the expiration of a temporary ceasefire between the Government and the ELN.

“Convinced of the importance of the negotiations between the Government of Colombia and the National Liberation Army (ELN) for the peace of Colombia and the progress of its population, I express my deep concern in the face of the violent events of recent days and a possible escalation of confrontations to the detriment of the political process and the situation of the communities in the areas affected by the conflict,” he said. 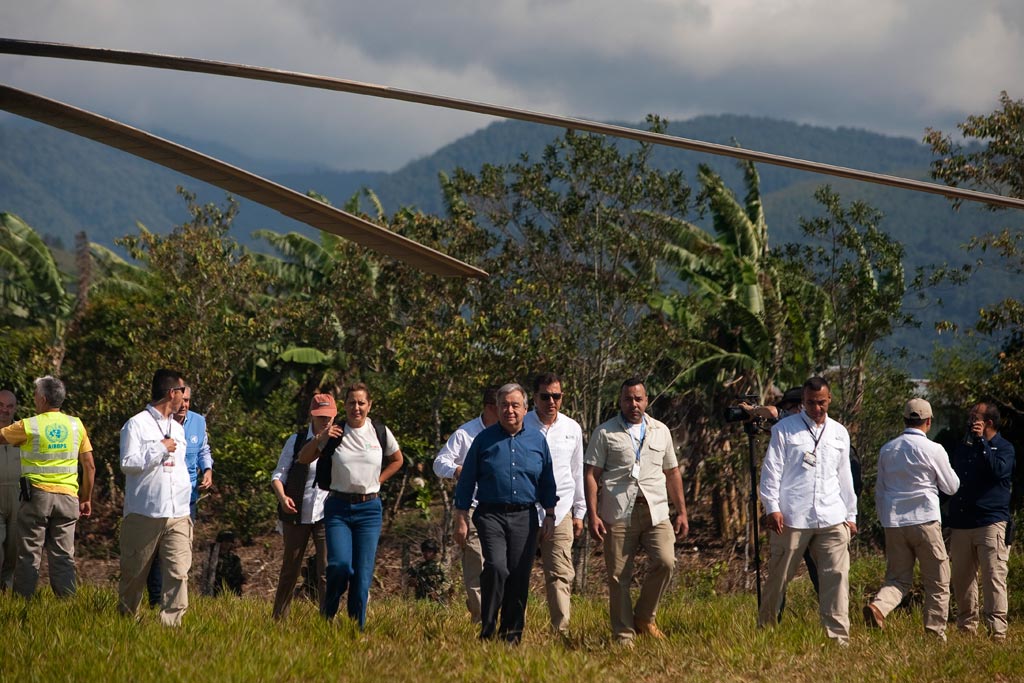 On the second day of a visit to Colombia, United Nations Secretary-General António Guterres travels to Mesetas, Meta. Photo/UN Verification Mission in Colombia

Rapid progress must be made in compliance with the new agenda items agreed upon between the government and the ELN, he said, calling for the cessation of armed actions and the resumption of a serious and constructive dialogue with a view to meeting as soon as possible the expectations generated by the commitment of the parties to reach a solution to their conflict through political means.

In that regard, he recalled the wish publicly expressed last week by the UN Security Council that the parties resume their efforts to agree on a renewal and strengthening of the ceasefire.

“I instructed my Special Representative in Colombia to take all necessary actions to facilitate the return of the parties to the table, and reaffirm the commitment of the United Nations with a just solution to the conflict between the parties for the benefit of the entire society,” he said.

In an official visit to Colombia, United Nations Secretary-General António Guterres on Saturday met with the country's President in the capital, Bogotá, where the UN chief said it is the duty of all the citizens of the world to support the peace process there.