In an official visit to Colombia, United Nations Secretary-General António Guterres on Saturday met with the country's President in the capital, Bogotá, where the UN chief said it is the duty of all the citizens of the world to support the peace process there.

“We see more and more conflicts arising, and old conflicts with no solutions in sight; and that is why what happens in Colombia is of fundamental symbolic importance for the world,” Mr. Guterres told a press conference at Palacio de Nariño, Colombia's presidential palace, following a meeting with President Juan Manuel Santos.

The purpose of Mr. Guterres' visit is to take stock of achievements that followed a peace agreement between the Government and the Revolutionary Armed Forces of Colombia-People's Army (FARC-EP) in November 2016, which ended 50 years of conflict.

The UN chief also seeks to reinvigorate the implementation of the peace deal, including the process of reintegrating former rebel combatants into society, and ensure that Colombians are committed to stay the course.

“This mission is clearly a mission of solidarity with Colombia and with the Colombian people in a historical moment and of enormous importance for Colombia, for Latin America and for the world,” Mr. Guterres said.

His visit also comes ahead of legislative elections in March and presidential elections in May, and at a time when a temporary ceasefire agreement between the Government and another rebel group, the National Liberation Army (ELN), has just expired.

The UN chief said he was impressed by Colombia's commitment to not only building peace but also guaranteeing the presence of the State throughout the Colombian territory, including the presence of administration, security, public services, education, and health in creating a development framework for civil society and for the private sector, all of which is an enormous challenge.

“It is something that is not done miraculously, from one moment to another. But I want to reaffirm here the full commitment of the United Nations in supporting the Colombian government in this project of enormous importance, to build peace but at the same time to build an inclusive democracy, capable of ensuring that the entire national territory benefits from development,” he stressed.

Peace is the only answer 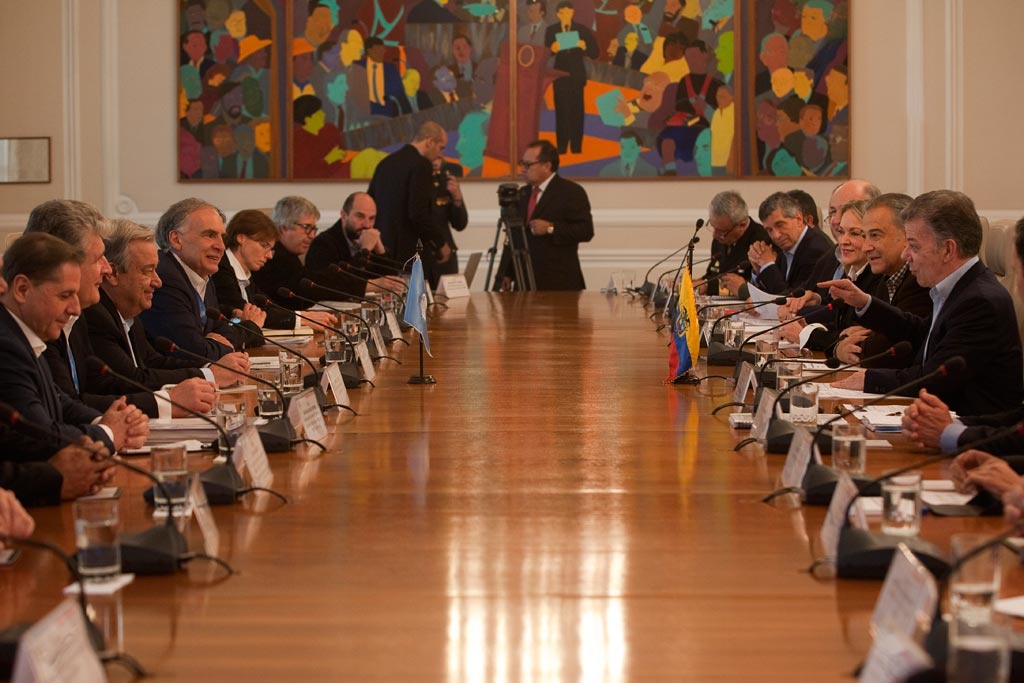 For his part, President Santos thanked the Secretary-General for his visit and the continuing support of the United Nations and the UN Verification Mission in Colombia, which is currently monitoring compliance with the agreements established in the peace agreement.

The President highlighted the effort of Colombia to end the conflict and reiterated, to Mr. Guterres, his Government determination to continue moving in that direction.

“It is a process, we are the first to recognize the challenges that we are facing, the most important has to do with the issue of security in rural areas, which suffered so long in the armed conflict ... As I always say, peace is like a cathedral and must be built brick by brick,” he said.

On Saturday, Mr. Guterres were to meet with officials of the Government and Armed Forces, as well as with FARC-EP leadership and the Catholic Church.

On Sunday, 14 January, the Secretary-General will travel to the Department of Meta, where his agenda will include, among other activities, a visit to a territorial area for training and reintegration of former FARC-EP combatants.

Colombia's peace efforts remain challenged by the task of reintegrating 14,000 former rebel combatants, the top United Nations official in the country said Wednesday as he also reported to the Security Council that the UN will 'closely follow' reports of a just-broken ceasefire between the National Liberation Army (ELN) and the Colombian Government.