‘Together’ summit at UN Headquarters in New York on combating the plight of refugees. UN News/Elizabeth

At a special summit at United Nations Headquarters in New York, universities, led by De Montfort University (DMU), spotlighted ideas for practical ways they can use the skills, experience and voluntary power on their campuses to support those in need in their local areas.

“Migration has become a scary word in some parts of the world. Some people use it to evoke apocalyptic scenarios,” Maher Nasser, the Director of the Outreach Division in the UN Department of Public Information told the gathering, pointing out that when well-managed, migration brings wealth and opportunities, especially when it is an individual's choice as opposed to a necessity.

Selected by the UN, De Montfort University (DMU) in the United Kingdom, held the summit on Tuesday, which featured panel discussions on refugees' challenges within local communities and universities. Partners at the event were expected to sign an action charter which would set out what will be done by universities on their own campuses to address the refugee crisis.

“The Together campaign fits perfectly with De Montfort's belief in the important role of universities as a force for public good,” said Professor Dominic Shellard, De Montfort University Vice-Chancellor, explaining that DMU defines itself by its diversity and being welcoming and open to all.

According to the UN High Commissioner for Refugees (UNHCR), an unprecedented 65.6 million people have been forcibly displaced worldwide – including 22.5 million refugees.

Calling it a daunting number, Mark Charlton, DMU Head of Public Engagement told UN News: “It is a challenge for universities to really humanize the work they are doing and move away from the conversation about statistics.”

“If you're talking about one person, or a family of people, it hits home a little more,” he added, “let's talk about people's lives.

founded the 'Every Campus a Refuge' initiative, which calls on colleges and universities worldwide to host on their campuses one refugee family and assist in their resettlement.

To date, Guilford College has hosted over 32 refugees, including 18 children, from Africa and the Middle East, providing them with English instructions along with cultural, social, academic and career services.

“It's a wonderful place-based education for our students, […] they learn what it's like to be an immigrant in Greensboro, to be a refugee,” Ms. Abdo says passionately.

VIDEO: At a UN event led by De Montfort University from the United Kingdom, students from universities around the world pledge support for refugees and migrants.

UN News also spoke with a young woman who was herself once a refugee.

ZamZam Yusef's mother paid strangers to take her 7-year-old daughter out of Somalia to Sweden. “Treated quite badly” by her so-called foster parents, at age 13 she shared her plight at a youth centre where an aunt in the UK was tracked down and contacted.

She, as it turned out, Ms. Yusef was the most fortunate of her siblings. Her older brother died while migrating through Greece and her sister was held in Libya for two years against her will. Fortunately, she was one of 160 people airlifted to Rome on Christmas eve.

Ms. Yusef is determined to remain optimistic, and encourages everyone to get involved in the community, by “volunteering, even making a cup of tea for an elderly person or helping refugees fill out forms.”

Launched in September 2016, 'Together' is a UN campaign that promotes respect safety and dignity for refugees and migrants. 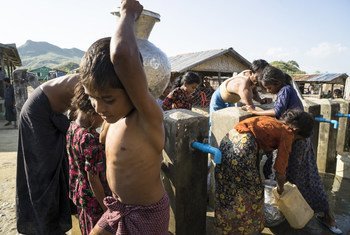 While the eyes of the world are on Myanmar's northern Rakhine and Cox's Bazaar, Bangladesh, more than 60,000 Rohingya children remain nearly forgotten, trapped in appalling camps in central Rakhine where the shelters teeter on stilts above garbage and excrement, the United Nations Children's Fund (UNICEF) reported Tuesday.