© UNHCR/Santiago Escobar-Jarami
A family is trying to build a new life in Chile after migrating from Vargas State, Venezuela.

As “policies shaped more by fear than fact” have caused untold suffering to migrants, the UN Secretary-General is urging countries to realize the goals of a global agreement that promotes enhanced international cooperation on migration.

António Guterres issued the charge in his message for International Migrants Day, observed annually on 18 December.

“Safe, orderly and regular migration is in the interest of all. And national priorities on migration are best achieved through international cooperation,” he stated.

Every year, tens of thousands of unaccompanied migrant children seek asylum in the European Union. Foster carers give these youth a new home in an unfamiliar country. https://t.co/6p4sZplP8O #MigrantsDay #WeTogether pic.twitter.com/o9jTfbKdbe

Globally, there are more than 270 million migrants, according to UN estimates.

Its objectives address the issue at all levels, including mitigating the factors which lead people to leave their homelands, whether to find work or for other reasons.

Host communities across the globe have a long tradition of welcoming migrants, said the head of the International Organization for Migration (IOM).

“The communities that thrive are those that embrace change and adjust to it. Migrants are an integral and welcome element of that change”, IOM Executive Director António Vitorino wrote in an op-ed for the day.

He added that migrants can also become “champions of resilience”, for example, during times of disaster, environmental change, unemployment, and political turmoil.

A longing to belong: Bachelet

“Every person who migrates has their own reasons for leaving behind homes and families, and each one of these people has their own unique experiences along the journey: their own personal story of exile and belonging”, said the UN High Commissioner for Human Rights, Michelle Bachelet, in a video message for the day.

Born in Chile, Ms. Bachelet had a great-grandfather who left France for the South American country, where she went on to serve two terms as president.

She, too, was forced to leave her homeland for a period, and she recalled how the solidarity and generosity expressed at this time helped her develop “a new sense of belonging, and hope.”

Stories like these show how all people share what the UN rights chief described as “a longing to belong”, which includes caring for loved ones but also connecting with friends and communities.

“I have frequently expressed my concern about the attitudes and behavior that reject, dehumanize, exclude and attack migrants”, said Ms. Bachelet.

“Even though such sentiments rarely represent the mainstream view of migration, a few try to divide us and shout down more moderate opinions. The effects of such divisive narratives are wide reaching within our societies, reducing our trust in and connections with each other. “

On International Migrants Day, the High Commissioner encouraged people everywhere to celebrate “what unites us”, adding that “because it is when we come together that we can overcome differences and struggles. It is here where all of us find that we belong.”

As the UN chief stressed in his message, all migrants are entitled to human rights protection, which is enshrined in the Global Compact.

“Yet, we often hear narratives around migrants that are harmful and false,” he said.  “And we often witness migrants facing unspeakable hardship as a result of policies shaped more by fear than by fact.”

The Secretary-General urged leaders and people everywhere “to bring the Global Compact to life, so that migration works for all.”

Felipe González Morales, Special Rapporteur on the human rights of migrants, and Can Ünver, chair of the UN Committee on Migrant Workers, warned that national security concerns are being wrongly used to criminalise migrants and those who support them.

“While security can be a legitimate concern and invoked as a justification for limitations to certain human rights, it cannot lead to the criminalisation of migration, or of those who support migrants,” they said in a statement.

The experts added that the Global Compact helps ensure human rights are respected at all stages of migration, and must be fully implemented.

Mr. Vitorino of IOM, the UN migration agency, observed that in the current “challenging” political climate, migrants make for an easy scapegoat for all the problems that plague society.

“Thus, on this day, we need to constantly remind the international community of the reality -- both historic and contemporary – that when well managed migration works, closed societies can become open, and political tensions fade away,” he wrote.

“Whether we are living, working, loving or building, we do so together.”

Integral to societies, migrants are central to COVID-19 recovery: Guterres

How to stay in shape and step up support for refugees 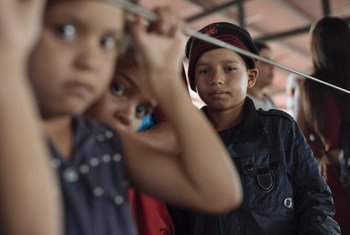