UNICEF/Vlad Sokhin
A girl from the Iñupiat community stands on a ice floe on a shore of the Arctic Ocean in Barrow, Alaska in the United States. The anomalous melting of the Arctic ice is one of the many effects of global warming that has a serious impact on the life of humans and the wildlife.
20 December 2017

The Arctic continued in 2017 to warm at double the rate of the global temperature increase, resulting in the second warmest air temperatures, above average ocean temperatures, loss of sea ice, and a range of human, ocean and ecosystem effects, according to the United Nations weather agency.

“While 2017 saw fewer records shattered than in 2016, the Arctic shows no sign of returning to the reliably frozen region it was decades ago,” said the Arctic Report Card, a peer-reviewed study that brings together the work of 85 scientists from 12 nations.

The UN World Meteorological Organization (WMO) said on Tuesday that the Arctic Report Card shows that the warming trend is continuing to drive dramatic transformation in the Arctic region.

The US National Oceanic and Atmospheric Administration (NOAA) said that the first 11 months of the year were the third warmest on record, behind 2016 and 2015, with much-warmer-than-average conditions engulfing much of the world's land and ocean surfaces.

This means that the 2017 global land and ocean temperature will likely end among the three warmest years on record, and is expected to be the warmest year without a warming El Niño.

“What is more important than the ranking of an individual year is the overall, long-term trend of warming since the late 1970s, and especially this century,” said WMO senior scientist Omar Baddour.

“Along with rising temperatures, we are seeing more extreme weather with huge socio-economic impacts,” he said.

A separate report, published in the Bulletin of the American Meteorological Society (BAMS), said that last year’s record global average temperatures, extreme heat over Asia, and unusually warm waters in the Bering Sea would not have been possible without human-caused climate change.

“This report marks a fundamental change,” says Jeff Rosenfeld, editor-in-chief of BAMS. “For years scientists have known humans are changing the risk of some extremes. But finding multiple extreme events that weren’t even possible without human influence makes clear that we’re experiencing new weather, because we’ve made a new climate.” 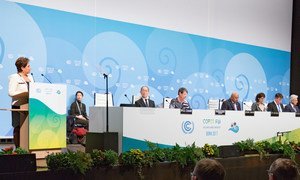