14 December 2017
New economic projections for Latin America and the Caribbean show moderate recovery in 2018 and growth the following year – with favoured expansions in consumption and domestic investment, the United Nations reported Thursday.

“Although there is reduced fiscal space in the region, we need to promote active public policies to sustain the expansion cycle,” stated Ms. Bárcena, adding that they include strengthening regulation, productive development, tax collection and intraregional trade.

After notching 1.3 per cent growth on average in 2017, the report maintains that regional economies would recover moderately in 2018, and grow 2.2 per cent the following year – noting that the regional economic projections are evolving in a more favourable international context than over the last few years.

According to the report, the global economy will expand at a rate close to that of 2017, or around 3 per cent, next year with emerging economies showing greater dynamism than developed ones.

In the monetary sphere, the current situation of ample liquidity and low international interest rates is seen holding steady.

Domestic demand will cause growth acceleration in 2018. While driven by private consumption, ECLAC attributes recovery in gross fixed capital formation in indicating that investments next year would contribute greatly.

“Spending that has a greater impact on growth and inequality must be prioritized, along with avoiding sharp adjustments in public investment to protect growth in the medium term,” Ms. Bárcena stressed.

ECLAC also noted some challenges and latent risks that may affect the consolidation of growth in the medium term, including a possible United States tax reform that would cause financial volatility due to an increase in capital flows to that country.

In its subregional analysis, ECLAC foresees that economies in South America are expected to grow by two per cent; Central America by 3.6 per cent; and the Caribbean by 1.5 per cent. 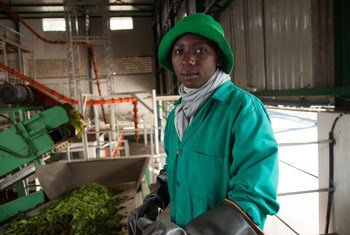 11 December 2017
A three per cent upturn in the global economy has paved the way to readjust policy towards longer-term issues, such as addressing climate change, tackling existing inequalities and removing institutional obstacles to development, according to a new United Nations report on global economic prospects.