UN Photo/Rick Bajornas
A view of the high Norwegian Arctic while aboard the Research Vessel Lance (July 2015).

6 December 2017
The United Nations today designated the years 2021 to 2030 as the ‘Decade of Ocean Science for Sustainable Development’ to boost international coordination and cooperation in research and scientific programmes for better management of ocean and coastal zone resources and reducing maritime risks.

The UN Education, Scientific and Cultural Organization (UNESCO) will be leading the campaign.

“The ocean is a new frontier – it covers 71 per cent of the globe [but] we have explored less than 5 per cent. The Decade will ensure greater coordination of research,” said Audrey Azoulay, the Director-General of UNESCO, urging all stakeholders to join the endevour.

“[We are] proud to be at the forefront of this effort,” she added.

Across the world, close to three billion people depend on marine and coastal biodiversity to meet their needs.

Oceans – critical for survival of all people across the planet – absorbs around a third of the carbon dioxide (CO2) produced by humans and reduces the impact of climate change.

Given this important, the 2030 Agenda and the Sustainable Development Goals (SDGs) call for specific action for the conservation and sustainable use the oceans, seas and marine resources (SDG 14).

The importance of oceans was also underscored at a major conference this past June at the UN Headquarters, in New York.

However, the cumulative effects of human activities on this vital important, including the impact of pollution, warming and acidification are yet to be fully evaluated scientifically and surveying the ocean requires costly ships and equipment, satellite imaging, underwater robots and remotely controlled vehicles.

It also requires thousands of scientists collecting and analysing the data, either in laboratories or in marine environments.

“One of the priorities of the Decade will be to strengthen and diversify financial sources, particularly for small island developing States and least developed countries,” said UNESCO.

“This Decade, will provide a framework for international coordination and partnership to reinforce research capacities in marine sciences and the transfer of technology,” it added. 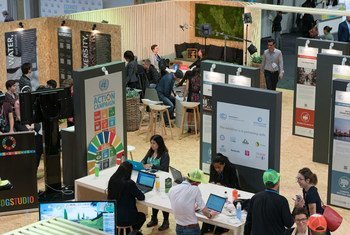