A gathering of senior representatives of the Somali Government, the United Nations and the international community concluded in Mogadishu today with a call for greater investment in the country’s economic development to create more job opportunities, rehabilitate essential infrastructure, and improve the living conditions of the Somali people.

For the second consecutive day, the Federal and state-level leaders of the country met with senior representatives of the international community in the so-called Somalia Partnership Forum to assess the various challenges facing Somalia, with today’s high-level conference focusing on humanitarian and development issues.

Participants commended the Government of Federal President Mohamed Abdullahi Mohamed “Farmaajo” for its leadership in the country’s drought response effort that averted a devastating famine in 2017. But several speakers also warned that the threat of a major humanitarian disaster still loomed over millions of Somalis, and continued support from international partners would be needed for the foreseeable future.

“Unfortunately, we cannot declare victory, and we have to exercise extreme caution because the situation remains the worst we have faced in recent living memory after four failed rainy seasons,” said Peter de Clercq, the UN Humanitarian Coordinator and the Secretary-General’s Deputy Special Representative for Somalia.

“We continue to need deliveries of humanitarian assistance to the tune of $100 million per month,” he explained.

Mr. de Clercq noted that international partners have provided over $1.2 billion in assistance to support the Federal Government’s drought response effort this year, adding that a humanitarian response plan for Somalia in 2018 will seek to raise another $1.5 billion.

“Without the support of the international community, we could not have averted this famine,” Somalia’s Prime Minister Hassan Ali Khaire said in his remarks at the event.

According to the UN Office for the Coordination of Humanitarian Affairs (OCHA), poverty, marginalization, armed violence, insecurity, political instability, natural disasters and a lack of economic development have driven up humanitarian needs for decades in the east African country.

Also, a lack of access to basic services, especially in the areas of education and livelihoods opportunities, can easily tip residents into the vulnerable category in terms of relief needs, as well as encouraging outward migration in search of employment and increased susceptibility to recruitment by militant groups.

In his keynote address, President Farmaajo said his Government intends to reduce poverty by two per cent each year and had created jobs for thousands of Somali youth since taking office earlier this year with assistance from the international community.

“We must still do more to retain our young people,” he added. “That is a must, not only to grow our country but also for preventing radicalization. We are fully aware that socio-economic improvements to the quality of our people’s lives…will undoubtedly help bring about political stability.”

President Farmaajo also reiterated his long-standing call for debt relief that would provide Somalia with access to loans from international financial institutions to pay for urgently needed infrastructure improvements.

“If we are not able to build roads required by our small businesses to bring their produce to market, it would be difficult to meet our stated goal of reducing poverty,” the President said.

A communiqué issued at the end of the meeting welcomed the Federal Government’s pledge to hold one-person, one-vote elections in 2021. The document also stated that the next Somalia Partnership Forum would be held in the middle of 2018. 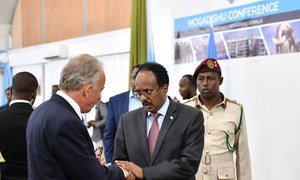 At Somalia's first-ever security conference, hosted by the country’s Federal President Mohamed Abdullahi Mohamed “Farmaajo” in the capital, Mogadishu, participants agreed to speed up security sector reform and develop a plan to transfer primary responsibility for the country’s security from the United Nations-backed African Union Mission in Somalia (AMISOM) to its own security forces.