Paramount that civilians are protected in Yemen, underscores UN

Voicing concern over the dramatic escalation in fighting in the Yemeni capital, Sana’a, and surrounding areas, that have reportedly killed about one hundred people and injured many more, the United Nations called on the parties to the conflict to uphold their obligations under international law and ensure that civilians are not harmed.

“It is paramount that civilians are protected, that the wounded are afforded safe access to medical care, and that all sides facilitate life-saving humanitarian access,” Stéphane Dujarric, the Spokesman for the Secretary-General, told reporters Monday at a regular press briefing at the UN Headquarters, in New York.

“We remind all parties to the conflict that deliberate attacks against civilians and against civilian and medical infrastructure are clear violations of international humanitarian law and may constitute war crimes.”

At the briefing, the UN spokesperson also said that relief workers in the city are not able to reach those in desperate need of help due to the sheer scale of violence and that there have been reports that ambulances have been attacked.

Renewing the Organization’s call on warring parties for an immediate cessation of hostilities in Sana’a, he added: “We cannot overemphasize that there is no military solution to the Yemen conflict. [We] stand ready to facilitate a negotiated political settlement that is inclusive, fair and sustainable.”

Earlier today, Jamie McGoldrick, the Humanitarian Coordinator for Yemen, highlighted the severity of the crisis and called for an urgent humanitarian pause to allow civilians to seek assistance, aid workers to reach them, and for the wounded to be evacuated.

I call on all parties to the conflict to urgently enable a humanitarian pause on Tuesday, 5 December, between 10.00 AM and 16.00 PM to allow civilians to leave their homes and seek assistance and protectionJamie McGoldrick, Humanitarian Coordinator for Yemen

“The streets of Sana’a have become battlegrounds and people are trapped in their homes, unable to move out in search of safety and medical care and to access basic supplies such as food, fuel and safe water,” he said in a statement.

“I call on all parties to the conflict to urgently enable a humanitarian pause on Tuesday, 5 December, between 10.00 AM and 16.00 PM to allow civilians to leave their homes and seek assistance and protection,” he added.

Mr. McGoldrick also urged UN Member States with leverage on the parties to the conflict to step up their engagement “for the sake of the protection of the civilian population.”

Further in the statement, the senior UN relief official also stressed that deliberate attacks against civilians, humanitarians and health-care personnel, as well as against civilian and medical infrastructure, are clear violations of international humanitarian law and may constitute war crimes.

In related news, the UN High Commissioner for Human Rights, Zeid Ra’ad Al Hussein, Monday appointed members to the Group of Eminent Experts on Yemen, established by the Human Rights Council in September this year, to monitor and report on the situation in the war-torn country.

In the resolution, the Geneva-based Human Rights Council –the highest intergovernmental forum on human rights within the UN system – requested the experts to carry out a “comprehensive examination of all alleged violations and abuses of international human rights and other appropriate and applicable fields of international law committed by all parties to the conflict […] and to establish the facts and circumstances surrounding the alleged violations and abuses and, where possible, to identify those responsible.”

“The group’s creation is an important step toward accountability and ending impunity for the serious violations of human rights committed by all sides in Yemen amid a worsening humanitarian crisis in the country, and ensuring justice and remedy for the victims,” said the UN rights chief, in a news release announcing the appointments.

According to the release, the experts will submit a comprehensive written report to the High Commissioner by September 2018. 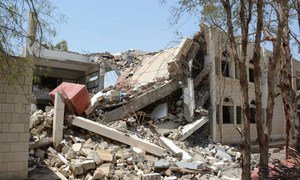 UN chief calls for end to all armed clashes, airstrikes in Yemen

United Nations Secretary-General António Guterres has called on the parties to the conflict in Yemen to cease all air and ground assaults, expressing deep concern about the “sharp escalation” of armed clashes and airstrikes in the capital, Sana'a, and other parts of the war-torn country over the past several days.