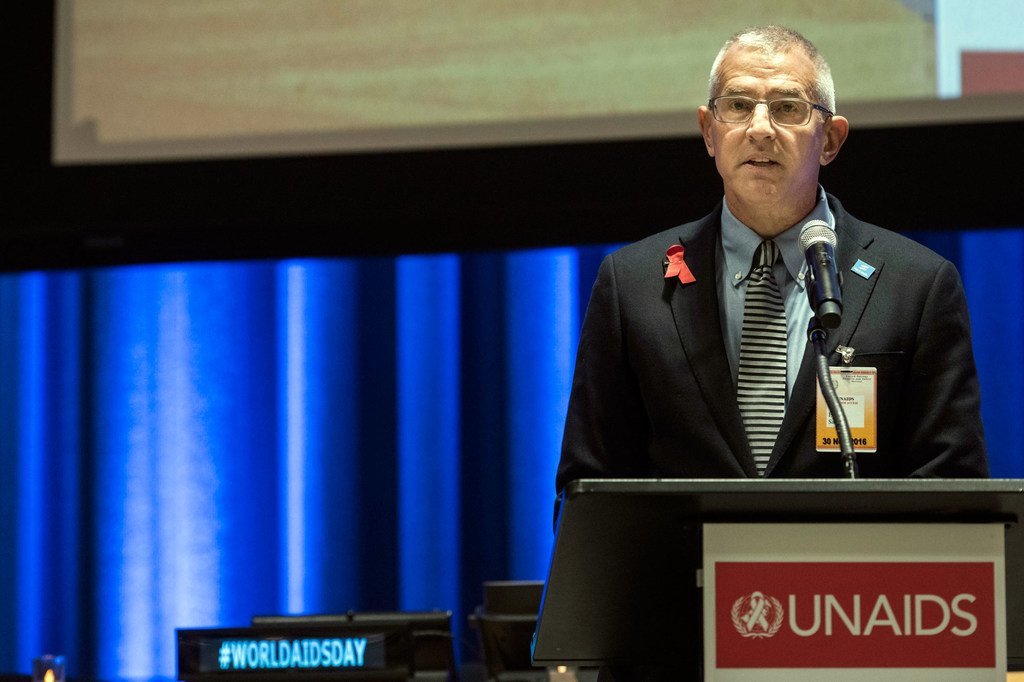 UN Photo/Mark Garten
Eric Sawyer, from UN Plus, a group of HIV-positive UN staff members, addresses the special event organized by UNAIDS on the occasion of World AIDS Day in 2016.
1 December 2017
Health

"I contracted HIV before the discovery of the virus," Eric Sawyer began, as he told his story to an audience of nearly 50,000 gathered in New York’s Central Park earlier this year. The cheers and applause his heartfelt speech received would have been unimaginable three decades ago.

In 1981, when a high rate of a rare cancer was first reported among gay men, nobody knew what was causing it. Researchers initially called the syndrome GRID, or gay-related immune deficiency.

It would be another three years before the virus was identified and eventually called HIV. Not long after the discovery, Eric lost someone close to him from AIDS – his boyfriend Scott Bernard. “He was definitely my soulmate,” the 63-year-old who hails from upstate New York said with a smile, while looking at old photographs. The smile, however, would quickly fade as he began relaying their experiences of discrimination.

Scott was very sick at that time. He had “no hair, looks like a skeleton, and covered with these purple colored lesions,” Eric recalled. The stigma associated with AIDS was palpable. Once, the couple went to a restaurant. Scott was drinking some water from a glass when a waitress came over to their table. Instead of taking their order, she took Scott’s glass of water and “wiped all of the silverware into the garbage can and started yelling: ‘Get out! Get out!’” She called them “diseased” and added a hateful slur to describe the gay couple. Thirty-three years later, Eric still feels the sting of such blatant and heartless discrimination.

The suffering of stigma was compounded by the rapid and uncontrollable rate of death. One weekend, Eric recalled, he would be going to a friend’s funeral and by the next “somebody else died of AIDS.”

This is the story of Eric Sawyer and his fight against the AIDS epidemic since the 1980s.

Medical advancements and new treatments were slow to arrive.

Channeling his grief and outrage into activism, Eric joined fellow activists to start a civil disobedience movement. In 1987, Eric co-founded ACT UP (the AIDS Coalition Unleash Power), an advocacy group determined to change the trajectory of the AIDS crisis.

ACT UP was known for its ‘productively confrontational’ style. From disrupting the New York Stock Exchange, to occupying the Food and Drug Administration (FDA), the group aimed to draw public attention to the epidemic and put pressure on the United States Government to take appropriate action.

Efforts began to pay off, but despite growing mainstream media coverage on the AIDS crisis, the disease continued to take a heavy toll.

In October 1992, in an effort to help raise awareness about the devastating impact of the disease, ACT UP members brought the ashes of their loved ones who died of AIDS and scattered them on the White House lawn. 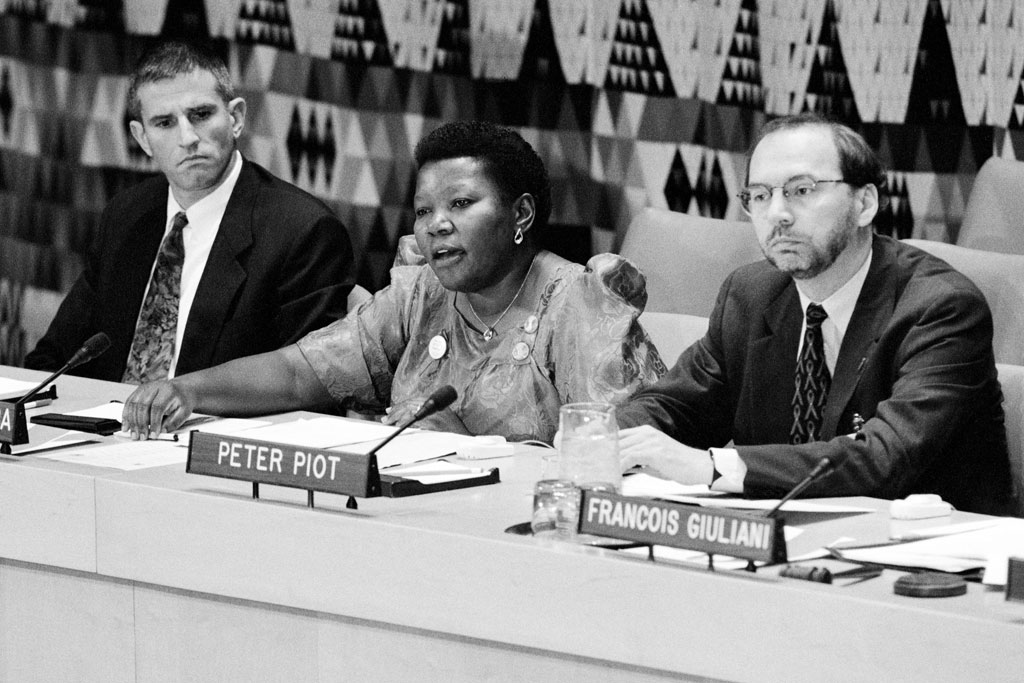 “We thought we are going to have about eight people’s ashes,” Eric recalled with visible emotion. In the end, hundreds showed up, including a grandmother who travelled on a bus across the country to bring her grandson’s ashes “because she was infuriated that nothing was done to save her grandson’s life,” Eric explained.

A glimpse of hope finally came in 1996 when the FDA approved HAART, a combination antiretroviral therapy that is highly effective in treating HIV/AIDS. AIDS was no longer a death sentence.

But when Eric learned that the treatment was out of reach for 97 percent of the world’s HIV-infected population, he became outraged at the injustice. “It is not fair that people like myself can have access to these state-of-the-art drugs when people in the developing world have no access whatsoever.”

In July 1996, during the 11th International AIDS Conference held in Vancouver, where the focus was supposed to be highlighting the effectiveness of HAART, Eric sounded a wake-up call to participants. “Are you listening yet? The headline that people with AIDS want you to write from this conference would read: ‘Human rights violations and genocide continue to kill millions of impoverished people with AIDS!’” he declared from the podium.

Eric pushed for AIDS medicines to be distributed worldwide, especially to the poorest regions. In 1999, he cofounded Health GAP (Global Access Project), which seeks to bridge the gap between access to essential medicines in developed countries and the lack of access in the developing world.

“My activism both was targeted towards UNAIDS to make it do the right thing, but also working with UNAIDS to help them develop the policies and procedures to do the right things,” he said, referring to the Joint UN Programme on HIV/AIDS. Impressed by his commitment to justice for all people living with HIV, UNAIDS recruited Eric as a Civil Society Partnership Adviser in the service of ending the epidemic.

During his time at UNAIDS, Eric helped develop a numbers of its policy programmes, including the three zeros (zero new HIV infections, zero discrimination and zero AIDS-related deaths) and the ambitious treatment target to help end AIDS known as “90-90-90”. 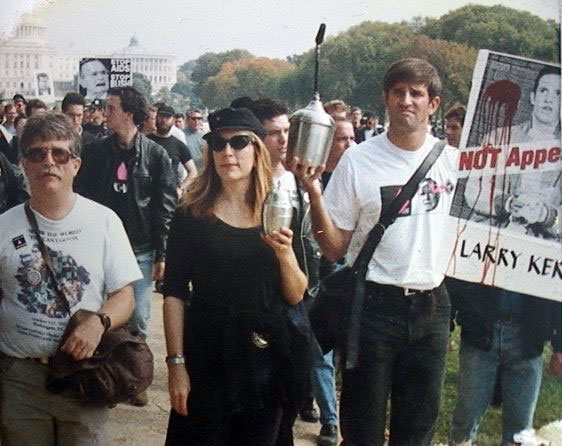 In October 1992, in an effort to help raise awareness about the devastating impact of the disease, ACT UP members brought the ashes of their loved ones who died of AIDS to the US capital to scatter them on the White House lawn. Credit: Tony Arena

Additionally, AIDS-related deaths have risen in the Middle East, North Africa, and also in Central Asia and Eastern Europe, where people who inject drugs account for nearly half of new infections.

To date, over 35 million people have died of AIDS worldwide.

Eric said he is motivated by “survivor’s guilt”. “I don’t know why I got to survive to more than three decades with a fatal illness, when so many of my friends and loved ones died,” he said, adding that he feels obligated to “fight as hard as I can to expand that excess” to care and treatment to the less privileged.

Eric retired from UNAIDS in 2016 and is now Vice President at Gay Men’s Health Crisis, a leading AIDS service organization, continuing his lifelong fight for an AIDS-free world.

“As long as there are still tens of millions of people living without access to treatment, I am going to continue to use my voice to try to draw attention to the lives of people who are dying needlessly around the world still of HIV, until everybody has access to treatment and human rights protection and food security and housing and clean water, and all of the things that should be a human right for everybody living with HIV.”

World AIDS Day: UN calls for renewed commitment to make epidemic ‘a thing of the past’

The world will not achieve the Sustainable Development Goals (SDGs) – which include the target of ending AIDS by 2030 – without people attaining their right to health, the United Nations said Friday, marking World AIDS Day with a strong appeal for the full realization of this fundamental right by everyone, everywhere.