UN Photo/Rick Bajornas
Scene from Codrington town in Barbuda during the Secretary-General’s visit in mid-October 2017 to survey the damage caused by successive Category-5 hurricanes.
21 November 2017

Caribbean countries need “a new and better deal” – one that includes access to concessional finance and adequate insurance – if they are to build climate resilience, United Nations Secretary-General António Guterres said Tuesday at an international conference to mobilize support for the reconstruction of communities devastated by a series of powerful hurricanes.

“During my visits to Dominica and Antigua and Barbuda, I saw a level of devastation that I have never witnessed before in my life,” Mr. Guterres said, noting that in these islands alone, damage is estimated at $1.1 billion, and total economic losses at $400 million.

This year’s Atlantic hurricane season was particularly active, with storms having been more frequent, and stronger. Of the 13 named storms, eight were hurricanes and of those, four were major hurricanes, including Irma and Maria. Across the entire Caribbean region, there was tragic loss of life and widespread devastation.

The pledging conference today at UN Headquarters in New York, was co-organized by the UN and the Caribbean Community (CARICOM), which is a regional grouping of 20 countries.

“Let’s not forget that these island States are not only interlinked by geography, but also interlinked by the economy, so when one country suffers, all countries suffer,” Mr. Guterres said.

He noted that extreme weather is becoming the new normal and sea levels have risen more than 10 inches since 1870. Over the past 30 years, the number of annual climate-related disasters has nearly tripled and economic losses have quintupled.

Countries in the Caribbean need a new generation of infrastructure that is risk-informed, to underpin resilient economies, communities and livelihoods, and to achieve the Sustainable Development Goals (SDGs), adopted in 2015 by 193 UN Member States.

But financing is a key challenge for many Caribbean countries, which have limited access to concessional finance because of their ‘middle income’ classification. They also have high levels of debt, much of it incurred through investment in recovery and resilience.

Caribbean countries are also paying hundreds of millions of dollars a year in remittance fees.

Disaster insurance has also proved inadequate to this unprecedented hurricane season. Debt instruments should be sensitive to the ability to pay, and have catastrophe clauses built in.

“In short: we need a new and better deal for the Caribbean, if these countries are to build climate resilience and achieve the SDGs,” Mr. Guterres said, urging international financial institutions and donors to coordinate risk sharing and concessional lending terms.

“Today must be about more than speeches and pledges,” he said. “It is an opportunity to forge a partnership for a better future, and to deepen a vision for recovery that brings together all actors and puts people at its centre, as active development agents.”

We should not let the people be punished once by nature and twice by outdated economic policies.General Assembly President Miroslav Lajcák

First is commitment to support the rebuilding effort. Funding and technical assistance are urgently needed to help the affected countries to get back on their feet. Housing, telecommunications, water and sanitation, healthcare services and education facilities are needed.

Second is to rebuild with greater resilience, he said, commending CARICOM’s goal of becoming the first climate-resilient region in the world.

“We should not let the people be punished once by nature and twice by outdated economic policies,” he said. 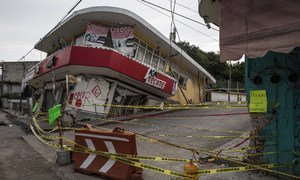